The Making of U.S. Citizen Anastase

Today is my Friday, I said on the chat system at work. You suck, my friend Katy said, but it’s for a good cause. I have to go to court I told people. The first reaction when you tell people you have to go to court is “What did you do? Or is it for jury duty?”

If you tell them Federal Court, they think you are Bernie Madoff.
I put in for the day off from work, telling my boss¸ “I’m taking Friday off.” It’s for a good cause, so he agreed.
It’s a beautiful day in Tucson. Got up and drove downtown to the Evo DeConcini Federal Courthouse at 405 West Congress Street. I am attending an event I’ve only seen clips of on news reports. The swearing in ceremony for new United States citizens.

My Grandparents and Great Grandparents would have gone through this, but I did not. I was born with this birthright. 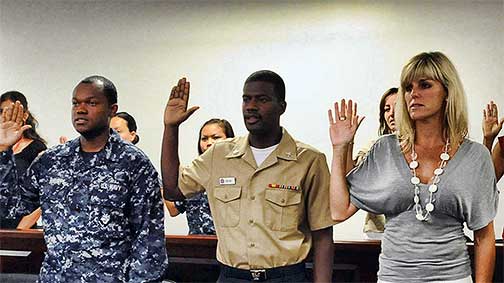 I was invited to attend by my work buddy Anastase Ahorwabaye, who after a harrowing journey to escape Rwanda’s genocide with a wife and three children, was getting his United States citizenship.
On this Friday, there wasn’t much else going on in this new, chic high tech courthouse. Security assumed you were there for the swearing in ceremony for new citizens.

The ceremony is held in the jury room, the only room in the courthouse that could accommodate the fifty new citizens and people who came for support.

The ceremony started with a brief film, then we were called to rise for the posting of the colors. That means the flags of the United States and the State of Arizona are placed in the flag stands. This was done by two men dressed in Revolutionary War uniforms, one based on a Virginia regiment, the other based on a New Jersey regiment. It would have seemed corny, but think of the symbolism. If done correctly, we are the inheritors of their tradition and sacrifice. They placed the flags and at that point, the Judge, Justice Jennifer Guerin entered.

She had us stand for the Pledge of Allegiance, which I’d never said with more fervor in my life.
We sat down and then another brief video from President Obama welcoming the new citizens was shown.
The fifty applicants were then ordered to rise and they took the oath of citizenship. Thanks to Wikipedia, I would like to post it here:

I found myself wanting to take the oath myself and mouthed it silently. Then, Judge Guerin asked if anyone wanted to get up and speak. The first was someone from Anastase’s church. The second was Anastase himself.

I didn’t time it, but he spoke eloquently about what he went through to flee genocide and come here. (He is writing his book with my assistance, so I am not going to steal his thunder and give details).

Judge Guerin asked if anyone else wanted to stand and speak I raised my hand. I wanted to praise Anastase, but make it brief. I wanted to give this a different take.

Much of life is serendipity. I borrowed Simon Schama’s book American Future yesterday when I had library books to return. I just finished reading the chapter on immigration. The first famous piece of American literature was written in 1782 was written by a French immigrant in Orange County, New York named Hector St. John Crevecoeur. He became a farmer and wrote about his neighbors from different places, all thrown in the mix to become Americans. We left a place where we might not have had control over our destinies.

You can come here, and become one of us. You aren’t an American by DNA. The court clerk said at the beginning, all of us were immigrants at one time or another. It is that correct mix that makes us Americans. This is not to say it is perfect. We always have to strive for this goal.

We argue about immigration, but these folks all did the right thing and came here legally and did what was needed to earn this day.

Every American high school student should be shown a tape of one of these ceremonies in Social Studies class. My friend has taught me how things can vanish in an instant. The next book though will be the philosophy of Anastase Ahorwabaye.

Anastase, of course, ended up the best known person in the room and had the largest support system there. He treated us to a Chinese buffet afterwards. Got to hang out with three of his four sons as well. He thanked me for coming.

No Anastase. Thank you!

Dealing with Stress and Anxiety

You Have No Legal Residence Here, Move On!