Conspiracy is a word we here often yet never get down to the grit of the reasons, afraid of what may happen to us, those who believe others were involved.  So for a moment let’s take the case of our President, Lincoln who attended a play with his wife Mary.

At the last moment his friend who was to join them bowed out, it was General Ulysses S. Grant and his soon to be wife, Julia Dent.

They arrive at Fords Theatre, his coach parked outside, the driver remained at the reins.  Inside of the box with the President and his wife, Major R. Rathbone and Miss Clara Harris; aid to the President.  Charles Forbes had arrived at the theatre late, and decided against staying for the play.  John Parker was assigned the post to protect the Presidents moves, and keep at his back.  But he left the box and took his own seat, he was said to be bored and went to the lobby instead.  Then out of the door, he met up with the driver of Lincolns Carriage and asked him to go with him for a beer at a tavern called Taltavul’s Star Saloon.   And there at the bar was Forbes, the Presidential aide, with Parker and Burns, who drove the coach. 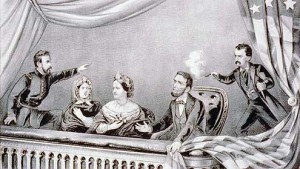 Booth appeared with no one there, an easy target, he shoot with his pistol directly at his head.  The bullet had entered on the left side of his head, behind the ear near the top of the spine.  While all this was happening it was co-conspirator Lewis Powell who missed his own target the Secretary of State William Seward.  Another man, George Atzerodt was to kill the Vice President Andrew Johnson, but he backed out, and never attempted his duties as planned.

President Lincoln was taken to the Petersen House, with co-ordinated efforts to capture those involved, Secretary of War Edwin Stanton stayed at Lincolns side.  Lincoln died at 7:22 am on the 15th of April 1865.  On the 26th of April Herold and Booth were found inside a barn, Herold surrendered but Booth refused so a soldier shot and killed him, with all the evidence now gone.  But Booth kept a diary – it would be this and the pages ripped out, where his plans were planned.

Booth was involved in smuggling quinine and other drugs from Canada into the United States, he was living in Canada at the time.  The first plans were to kidnap the President, that is, before the Confederate gave in to the North.  While in Canada Booth was working for the Confederate agents Clay and Thompson to organize the kidnapping.  Plants were made for him to stay in Washington D.C. with John H. Surratt Jr., so he returned with a huge sum of money, $12,499.28, to the penny.  It was transferred from the Bank in Canada to an account at Chaffey Company in N.Y.  This information came about by a insignificant man from Tennessee who was told to deposit it into a bank in Canada, his name was Daniel Watson, a Cotton Speculator, and it sounds too fishy too me.

Booth later wrote in his diary, “I am to find 15 men I trust and head them north.  The messenger brings me $20,000 in gold and I am to start at once.”  It was this suspect who was connected to the Union Judges Advocate Generals Office.   It was fear on the part of the Judges Office that the disappearance of Booth’s Diary took place, until after the conviction and hanging of those who they believed plotted the assassination.

Like with JFK there was not adequate protection for Lincoln, and like JFK he was seated next to his wife, and the so called culprit had dropped his weapon, for anyone to find. Could it be the only bodyguard assigned to Lincoln was given money to leave his side?  Or was he really part of the plot?  Why were all the ways out of Washington D.C. closed, except for the one Booth used.  Why were any telegrams stopped without any communication, does this all sound familiar, when JFK was killed, no phone lines in or out of the D.C. area. And that diary was hidden until long after the Conspiracy Trial and then, eighteen pages were missing. Or, was the Union tired of Lincoln and his dictatorial administration?

All of this will never have real answers like many disasters, deaths, and missing persons.  Lincoln was set up, and it wasn’t the first time, and it won’t be the last.

Intro: Five Big Questions in Life and How to Answer Them