Jensen Button, David Coulthard & Lewis Hamilton are names we remember. The high profile imagery of a F1 driver, with all the glamour attached, while I do not decry their fame or wealth as theirs is risky life. The also reap the rewards.

Next time you watch Sky sports, tune in to Monday night Speedway to see the other side of the motor racing scene. While F1 drivers have nice pits, pit crews and warm motor homes, costing thousands of pounds each. The speedway riders sit in an old bike sheds, with the rain pelting down, freezing cold between races. Whereas motor sport has progressed with the times, Speedway is still stuck back in its roots as a poor man’s sport. Most tracks are former dog racing track as at Hackney, Wembley and Bristol. 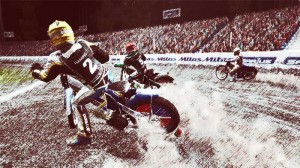 In this day of multi-million pound football transfers. For kicking a bit of plastic. Consider these instances in comparison. At the 2007 British GP in Cardiff, British rider Chris “Bomber” Harris ran into an iron fence at over 70mph, he was trapped there for five minutes, while the doctor and medics checked him. He went back to the pits while the track was cleared. With badly bruised ribs, broken & bloody nose and limping badly, he came back to the line for the race. The crowd burst into “The Dam busters march” as a tribute. It still brings a tear to my eye today, thinking of that moment.

Coventry 2009-with a big Premier league meeting planned the Coventry had to call on their best men. Among then, a young rider called Ben Barker, who had to “double up,” this means to get a reasonable salary, he had to ride for a second time. In this case First division Rye House. Rye house is based in Hertfordshire, just north of London. On this night, Ben had to finish his last race for Rye House, then dash to a chartered helicopter to be flown to an airport, then picked up by the Coventry team. He had to change from one set of leathers to the Coventry leathers in the back of a van, which had spare bikes in. Coventry had to keep switching the order, so as to give him the best chance of an early ride and more points. As he entered the stadium, the buzzer went. That means two minutes to get the bike to the line or face elimination from the race. Coventry team members were desperately running the engine up, pushing the bike to the line as Ben Jumped on, he did make it in the end. But he had to do a journey of nearly 150 miles, just to get a few extra pounds.

When you next see the glamorous F1 drivers, please remember even top motorcycle riders do not make enough to cover basic running costs. Unless you get to be like Rossi.