The Future of American Football

I’m going to begin this essay with the foolishness about Super Bowl XLVI, and then speak about my young friend Alma, who gave me a laugh about the Super Bowl. Then, I will get to the heart of the matter, where I see American Football going.

The controversy began the Monday after the New England Patriots defeated the Indianapolis Colts for the American Conference Title. The Patriot’s game balls were deflated. Tom Brady’s balls were deflated?! Am I supposed to answer that?

Well the game ended, and the only ones who were deflated were the Seattle Seahawks players Marshawn Lynch, Chris Matthews, (No, not the Chris Matthews from MSNBC, the unknown wide receiver, who kept looking himself up on Wikipedia. You aren’t famous enough for that, son!) 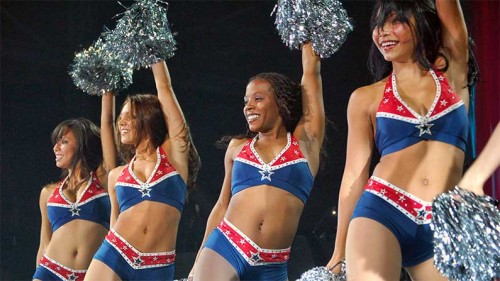 Now for my friend and the conversation we had last week.

Alma is a twenty-year-old, studying early childhood education and teaching in a pre-school.

Last Thursday, we were riding the bus and talking about the upcoming Super Bowl. Alma was cheerfully playing with her new phone and was curious about prices for Super Bowl tickets.

Alma is a poor student, who rightfully got sticker shock, when she saw the prices. Now for a young lady, this is a dilemma. Christian Louboutin shoes, Super Bowl. Hmmmmm.

Suddenly, her cheerful, open face blurted out. “I will make a YouTube video.”

I looked at her askance. “You are pretty, Alma, but what will this YouTube video be for?

“Santa Clara, California, it will be cloudy. If I get rich in the next year, I might go. It would be good for a writer, and take me to the next level. I would make a YouTube video, but Alma has a better presence. People will like her smile and well, she is just plain nice and gentle. You would see why she is good with kids. Today is Sunday; I might tell Alma this if I see her tomorrow.”

Now on to the serious business of this essay. My take on American Football and the issues I would like to cover. Some of this will be with my usual silliness; some of this will be serious. I am not an expert, but can only use what I see as common sense for issues in the sport and what I may see as its future.

As a historical note, President Theodore Roosevelt helped create the game people enjoy today and kept it from being banned. This CNN story will explain in more detail.

There were deaths in the sport. Now, most immediate deaths seem to be during workouts in hot weather. Then there is the insidious factor that’s growing in scope: Brain injuries from years of hits that turn up later.

I am being truthful when I say I am contributing to what happens in American Football. I follow the sport. From the rent-paying job I have, and general observations I have made football has the following positive aspects:

Your place in your circles: What do you contribute to your world? At my rent-paying job, I see my job as being the fullback, who does his job, grinds it out on the ground, blocks where needed and pays attention.

Strategy: In my rent-paying job, when I troubleshoot, I need to think several scenarios ahead. This also goes to my home life, to a personal situation, where I also have to think several moves ahead. That stretches your mind, of course, as long as you don’t get too many concussions.

Teamwork: Teamwork is a major part of my rent-paying job, and the writers’ organizations I belong to. I can be a maverick; there really is no “I” in team. You don’t shed all your individualism, but remember the saying, “No man is an island.” You have to chip in, when needed.

Confidence: Calling plays, getting hit, getting up, when you are down, not quitting.

These are what I see as the positive aspects. I don’t want to call the other aspects negative, but room for improvement.

I follow two teams. For college football, I follow the Alabama Crimson Tide. For the National Football League, I follow the Green Bay Packers. Any readers who want to know why those teams, ask.

For another look, check out this link. It is from Lexington, the United States Editorial column of the British publication, The Economist.

The article states actuaries have predicted one player in three will develop some sort of brain injury from playing American Football. Keep in mind, by the time a player is in the NFL, he has played Pop Warner football, high school, and college. He’s been using his head (for more than brains or a hat rack) since childhood.

Here is a 2009 article from Malcolm Gladwell, who I disagree with here, but respect for other things. Also from the New Yorker: From Nicholas Dawidoff, How to Save Football.

Dear Reader, I want to help save the game, not see it disappear. You have issues though when according to the Lexington column, almost half of parents no longer want their sons to play the game. I will have more about that later.

Lexington also mentions boxing. Fathers and sons used to go to Boxing matches together. Boxing has been relegated to Casinos, especially in Las Vegas.

There are only three downs in Canadian Football and a longer field. This opens the game up to more passing. The defensive plays one yard from scrimmage. Maybe some of these will help.

Women playing American Football? Here is an article from the BBC about Lauren Silberman, the first woman to be in the NFL combine.  She did not make it, because of an injury, but if they can play, and they qualify, let them.

I foresee the following possible scenarios:
Fewer parents allow their kids to play. High schools find the insurance is too prohibitive to have teams take the field. You now have fewer players coming up.

Colleges that are not NCAA Division I give the game up because they are not making money from the football program.

OK, what happens now? Think of this. In the marketplace, you charge what you think you can get. In this case, where is the balance? If you child is highly intelligent, are you going to risk them getting brain damage?

In that case, where do you recruit your players? Last year, CNN had a series called Chicagoland. It showed a gang-ridden neighborhood on the Far South Side. Guess what? There is your recruiting ground for football players. Why? For these kids, with people being murdered all around them, getting concussions now and brain damage later in life are the least of their problems.

I was told the NFL would never go for the following, but at the rate things are going, they may have to.

Major League Baseball has academies in nations, such as the Dominican Republic for teenager players. What if NFL teams created such academies in their territories? An academy in Northern New Jersey, for example, would be owned by the New York Giants. The youngsters would have to be carefully selected. I’m not in the medical field, but I wonder if there is a way you can check a youngster for the potential of injury, especially to the brain. I’ve read articles about fast twitch vs. slow twitch muscles and genetics is a hobby of mine.

Maybe, it sounds Orwellian, but I don’t think so. The research may help mankind in other ways. This can be a way for the NFL to contribute further. The Football Academies can train these young people, not just to play football, but as students. You are also creating new people to support the game, plus they can play other roles as referees and coaches.

If I ever had the money to own an NFL team, I would be looking for players in the poorest places. I researched the poorest cities in the United States and the poorest towns with 1000 or more people. This is where I would search for my future players. I live in Arizona. Besides my home in Tucson, I would be looking in Douglas, Arizona, on the Native American reserves. In the rest of the country, I would look in Appalachia, in East St. Louis and many others. For these kids, football injuries are worth the risk.

Who says we limit it to the United States? We have had players born in West Africa. You can have academies there. I’m sure the Ghanaian and Nigerian governments would not object to the help in educating some of their kids.

Why not in Europe? I am sure there are kids in Eastern Germany, left behind by communism, or in the Balkans, who would be willing to take the chance.

Yes, it looks like the Russell Crowe movie, Gladiator. Well, in a way it is. No one ever said this is a gentle game. I want it to survive and grow for the positive aspects of the sport. I wish good fortune for the future of American Football.