January 7th, 2011 was probably one of the saddest days of my life. On that day I faced what was probably the most difficult ordeals in recent years. I thought prior events had prepared me for what I was about to go through, but I was wrong.

During the last five years we had grown close to our 72 year old next door neighbor after the hospitalization and death of her husband, Israel. We shopped, cooked, ran errands, fed her cat, accompanied her to the movies, and spent every holiday with her including Christmas. We were happy to help her as she had few friends and no family living nearby. We shared many laughs and used to joke about our ample stomachs, referring to them as “our alien babies”. Through many difficult days we had become friends. My uncle and I were neighbors she could rely on which made what happened even more difficult. Getting around her apartment was very difficult for her. Many times we had picked her off the floor becuase of a bad fall. 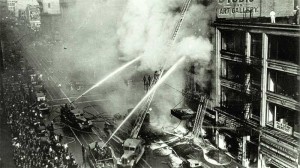 The morning of the fire started off as any other day. I called to check on Claudette and offered to pick up some groceries since it was snowing. After dropping off the groceries, she complained that she was cold and was told by the super that he didn’t know when the boiler would be repaired. At around 11am I heard my neighbor screaming and ran next door. Her clothes were on fire. and both her front burners were turned on. I ran to get my comforter and told my uncle to call 911. I tried smothering the flames, but it didn’t work, neither did throwing throwing two pots of water at her. When the flames spread and the apartment filled up with smoke, I had to leave. I was choking on the smoke. My neighbors head was bowed by that time, and she was unresonsive. Leaving her in a burning apartment was the hardest thing I ever had to do.

The FDNY showed up probably a minute later. She was handicapped and wasn’t able to get out of her chair because she was flailing her arms and stomping her feet. I burnt my fingers because I tried to rip the burning top and vest off of her. I suffered second degree burns on my fingers and left foot when my boot caught fire. Since I was the only witness, I was interviewed by both fire marshals, and detectives. Both her burners were on to keep warm. Her clothes caught fire as she passed by. I commend the FDNY, because they put out the fire in less than a half hour. I was taken to the Cornell burn unit where I was treated for smoke inhalation and some second degree burns. My neighbor was pronounced dead at the scene. After the shock wore off came the anger. I questioned the whole unjustness of situation. Claudette died a horrible death, but the landlord was never held accountable for not providing any heat beginning the previous night.

For the first several weeks, I was still pretty much in shock. I accompanied the family to the funeral parlor to finalize arrangements and also went with them to the city morgue, where they were told that because of the fire my neighbor wasn’t “viewable”and that there would have to be a closed casket. I cried that night, remembering how I had warned her not to keep her stove burners on. The first pangs of guilt hit. Why didn’t I turn the burners off before I left the apartment? Why didn’t I scream for help as soon as I entered her apartment and found her clothes on fire? While waiting for 911 to arrive, I tried to do everything myself. I cried also knowing that her precious cat mimi perished as well.

Two days after the fire, while coming home from shopping, we heard this frantic meowing. Mimi was alive and had survived in the burned out apartment without any food or water for two days. We called the 7th precinct and our super opened up the door so we could take Mimi into our apartment.

Because of the autopsy, the wake and funeral was held a week later. The family and I set up pictures all around the casket since it was closed. Several people gave eulogies including myself. I remembered her sense of humor and spoke about how we used to tease each other about our ample stomachs, referring to them as “our alien babies”. Although I went to the wake and funeral, I didn’t go to the burial out at Calverton National Cemetary. I was so physically and mentally exausted from ordeal, that I slept an entire day.

For almost three months now, I have gone from feeling numb and in shock to being depressed and angry about the senselessness of my neighbors death. Had their been heat in our apartments, maybe she would not have had to turn on her top burners. On the other hand because of her medical conditions;polio, arthritis, poor circulation and diabetes, she was frequently cold. She also used a quad cane and walker to get around and may have not been using the cane that morning when her clothes caught fire from the stove. I pondered these questions for almost three months now, and realized it would take many more months until I stopped asking.

I have tried to remember all the nice things Claudette did for her friends including us. She would forever be remembered as a kind and generous person.

I am a poet who started writing in her forties.I have been published in three facebook anthologies and in online magazines.Some of my poems have been two star finalists on voices.net,and I came in third place in the May 2010 poetry contest.I have created a number of online poetry groups,two of which are on facebook.I also hope to publish a book of short stories some day.I previously worked as a Social Worker with abused and neglected children and their families.

Are You Learning Spanish?