From Mathematician to Artist: Alzheimer’s breathed a new life into my brother, Marvin. I made this jarring observation when I flew to Phoenix to spend some time with my sister-in-law after his death in early 2009.

In the life where I knew him best, Marvin controlled his surroundings by using a sharp analytical mind and an even sharper tongue. His intellectual capacity scared me as the sister seventeen years younger. He could talk philosophy – albeit with cynicism – and he could rip into mathematical theorems as easily as he walked. But he was also my older brother, playing Santa Claus when he came home from college to give me a bit of childhood in a household filled with adults. 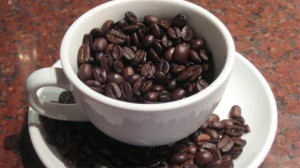 He lorded over my other brothers and me as the reigning first-born son. I feared him, loathed him and revered him all in one big bundle of mixed baby sister emotions. He was sometimes difficult to love during those years, but as I grew older, we developed a mutual respect for one another.

A decade before his death, he began to lose his capacity for speech and overall memory of simple tasks such as balancing the checkbook. That’s when the personality transformation began.

My brother became as endearing as a lost little boy in the woods, unsure how he got there but curious about the leaves on the ground. He returned to the state of grace found only in the very young — that place before the world intruded and caused us to put up our defenses.

His wife, Joyce, assumed the role of leader. He trusted she would take care of him as his mind lost its former sharp edges.

Long before becoming a math professor, Marvin harbored creative talents for music and painting. Joyce decided to enroll him in an art class at the local senior center in Scottsdale. 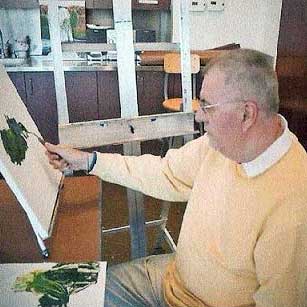 In that small room filled with tables and easels for 15 students, the new Marvin emerged from the cocoon as a butterfly, fragile and elusive, but beautiful in his individuality. With inhibitions gone and judgments no longer impeding his path, he let loose on canvas the reds, oranges, yellows, blues and greens of exploding creative expression.

In that art studio, Marvin regained the dignity stripped away by Alzheimer’s. He told Joyce after his few first classes, “I was a mathematician, and now I am an artist.”

He lived for his art classes and greeted each painting with pleasure. I visited him after he had created a dozen paintings. He proudly showed me each one that hung in his home.

His presence in that art class stripped away many of the assumptions held by others about Alzheimer’s. There is a tendency to treat those with mental challenges as if they are no longer human or capable of understanding the most basic of human expressions. We lose them to the disease because we are told this is what happens as the disease progresses. In Marvin’s case, Joyce did not know those with Alzheimer’s disease weren’t supposed to have the ability to draw or paint because of their lack of visual and spatial acuity. And because Mary Gulino, Marvin’s art teacher, didn’t know that either, she treated him as the person he had become — a man with much to say but without the verbal ability to express it.

After three years, Marvin had painted more than 20 Arizona landscapes, all recognizable and vibrant — a miracle on canvas.

Joyce and I visited Marvin’s Monday morning class the week after his death. When we walked in the classroom, Mary rushed over and grabbed me. “You look just like him,” she exclaimed.

“For three years I studied his face,” she said. “I watched him to see if I could discern what he needed as an artist since he couldn’t tell me. The angles of your faces are exactly the same.”

She told me she mixed the paints for him and then she would hand him a palate knife covered with paint. I asked about a recent photo that showed my left-handed brother painting with his right hand.

“He painted with either hand depending on his mood,” she said. “I would hold out the knife, and he would decide which hand.”

Several students from the class joined the discussion.

“He would start by touching the knife to the canvas over and over again,” a gray-haired woman said. “I’d watch fascinated because I thought he was creating nothing and then this beautiful mountain would appear.”

I thanked Mary, but she pushed aside my inadequate words. She said Marvin had made her a better artist, teacher, person.

“Thank you for sharing him with us,” Mary told Joyce.

A few weeks before Marvin died, Joyce held an art showing of Marvin’s paintings at their home, inviting Mary and all of his fellow art students. A photo from that day shows Marvin standing tall, with dignity and pride, a broad smile on his face. He did not resemble a man nearing the final stages of Alzheimer’s. He resembled at man at peace with his world.

“I just wanted people to recognize that he was still a human being,” Joyce said.

The Alzheimer’s journey is daunting. However, with the support of many loving people escorting him down the path, Marvin lived a full life to the end. His canvases filled with vivid colors leave joyful hope for a brighter journey for others living with Alzheimer’s.

I am a storyteller. Any time I use language, either in speaking or writing, I tell a story. I can’t help it. Someone once asked me if I could ever turn it off. I responded, “Why would I ever want to do that?” I started my career as a high school English teacher, holding the dreaded red pen over thousands of essays for seventeen years. When I lost the passion for teaching others how to write, I knew it was finally time to put the pen to paper and do what writers do. So I wrote. And I still write. After gigs as a reporter, columnist, editor, publisher, and public relations director, I’m now a full-time writer. I write my blog, and I have several novels in various stages of production. I’m also putting myself through an independent study program on how to use social media and the web. I’ve published three novels and one work of nonfiction and received several awards for my writing.

I was born and raised in Michigan. Then Florida beckoned, and I moved there in 1980 and raised a daughter on 20 acres in rural northern Florida with my first husband. In those days, I was known as Patricia Behnke. After my divorce, and while working for the Florida Fish and Wildlife Conservation Commission as a public relations director, I reconnected with a lost love from my teenage years in Michigan. He lived in Pittsburgh, and when we married, I left Florida for the Steel City. All the places I’ve lived thus far share a part of my heart. But the biggest part of my heart goes to my daughter Anna and my husband Robert.

My first e-book on Kindle, is Live from the Road, a novel about four women who hit Route 66 in one hilarious and enlightening journey from Chicago to L.A. I am revising my next novel after first reads by trusted colleagues. I haven’t decided if I’m going to go the traditional route with this book. My decision will be based on the results of Live from the Road. The new book, Trails in the Sand, is an environmental love story (my new genre designation). A family uncovers secrets from past generations as the Deepwater Horizon oil spill creates upheaval for the environment and wildlife.

Maya Kavita Apr 6, 2015 0
Let the Wookiee Win The LA Times once published a list of the top 10 sidekicks of all time. For the record, in The…
Featured