Before having children I was efficient, punctual and tidy. Known as “controlling” by those closest to me —a textbook Type A.

Evolution has since exerted its dominance and old standards of “perfection” and “completion” have been re-defined. With the entrance of each child into the family commune, a little piece of my old self has vanished.  Thrust into this structure-less Type B system while maintaining composure is my perpetual quest.  If I don’t adapt and “loosen up,” I will perish.

Many years and five children later, I choose sanity over order. Here are a few examples of how I’ve (temporarily) relinquished control:

1. Type A loss of “voice”- On some days, I don’t finish the morning housework until 5 pm. My hectic schedule may not allow me to get to it all until then. So, why bother making a child’s bed four hours before bedtime?  Type A will make a statement de facto despite Type B’s dictatorship. In other words, “go with the flow,” but squeeze it in if you can to pacify your inborn need for order.

2. Career waitress/server– No more force-feeding kids that aren’t hungry. I am resigned to my full-time position as a waitress-server and my inability to achieve synchronized hunger and tastebuds between all five of my young children on any given occasion.  Having become a short-order cook, I have about 4 pre-cooked no-brainer meals on hand and ready to heat up on demand.

3. Loss of order and tidiness – My drawers were once the envy of the most exclusive retail clothing stores, but now I’m content just to have the same genre garments together— whether rolled into a ball or symmetrically folded and neatly-placed in a drawer. This would have been totally UNACCEPTABLE the first 30 years of my life. Now it’s the hallmark of success in this department.

4. Loss of ability to own and care for quality stuff– We had collected unique ornaments on our marital journeys across different lands. These sentimental memorabilia have ultimately lost the battle against my young army’s destructive limbs.  Memories have ceased to have a physical manifestation in this world and have thereby, been reduced to mere symbols within our collective marital consciousness. Our relationship with the material world is precarious.  We’ve learned to love and let go of our cherished, hard-earned material accumulations abruptly. Although it still hurts and pisses me off each time it happens. 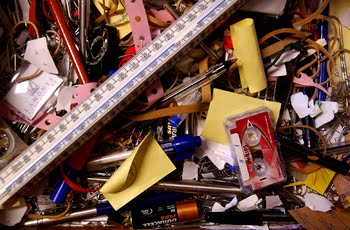 5. Abandoned evening rituals– Long ago, television existed and books were part of my evening wind-down routine. I also used to pamper myself with scented lotions, long bubble baths and foot rubs.  Because “me time” is limited to no more than a couple of ungodly hours at night, all PC (pre-child) nighttime activities have since been replaced with creative writing.  When my eyes lose their ability to focus, I stumble into my bedroom and collapse, face down onto the bed— if not right onto the keyboard first.

As a classic Type A in remission, I’ve had to surrender by accepting the complete abnegation and resulting nullification of PC Self.  This is my present reality and I wouldn’t change a thing. I own the wee hours of the night and that is when I sigh deeply, settle into my desk chair, and transform into a soldier— numb to the chronic exhaustion and powered by pure adrenaline.

At this time, I escape into my rich inner world.  Ironically, I now think that I don’t need to control so much of my outer world anymore.  And I like that by force of nature, I’ve re-invented myself and am learning to thrive under these foreign Type B conditions.

Attention Type As:  Like myself, have you noticed a similar evolution in yourself when you experienced a major change in lifestyle

?  If so, does this mean that we’ve “arrived” and have now morphed into one of them (the Type Bs)?  If yes, then perhaps we are no longer “in remission” but in “transformation.”