Suicide on the Toronto Subway: This happened five days before Christmas in 2011. It was like any other day too. A beggar strolled the subway car, asking for change. “That never happened in Toronto before,” I said to an older lady, directly across from me.

“When did it start to happen? “she asked.
“The last time they raised the transit fares.”
“When was that?”
“A couple of years ago,” I answered.
“I’m from Cape Breton,” she continued the conversation, “I’ve been to the entire best transit systems in the world—Paris, London, and Shanghai. That would never happen there.” 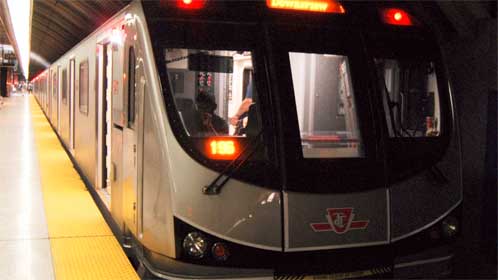 The train had just entered the next station when a voice sounded on the closed operator booth adjacent to me. “Someone is at track level,” it said. Just like that, the train slowed down and crawled to a stop. The subway doors opened, letting out passengers, before letting on more people, before closing again.
Out of the blue, the power went out, leaving everyone in darkness.  “What happened?” asked the same lady.
“Someone jumped.”
“Here?!” Her shock was palpable.
“Yup.”
Right then, a transit officer entered the car and began to guide an orderly evacuation from the train. When I got to the subway platform, I realized part of the train was still in the tunnel and the platform was jammed with people, trying to go up the staircases, or escalators. I took a cursory examination of the front car, seeing no blood, or guts.
I found the masses of people upstairs. Transit buses came to the station, dropping off passengers. The collector booth was closed, where I stood, hearing a radio like voice.  “He looks alive,” it said. “He looks alive,” it confirmed.  A fire truck arrived, parked out front, followed by an ambulance with a stretcher, and other support devices. Then the police showed up. In such a tumult, arguments flared up between members of the public with transit officials. “Damn union,” someone shouted, “You want to go on strike and get paid more for this?!” More people stepped, adding their point of view, but the police faced them.
Even an elderly man came off a recently arrived bus, shouting out racism to those who were Chinese. He was quickly taken outside while people inside used their blackberries and other handheld electronic devices to film, or photograph, a possible arrest in progress.  “All for Twitter!” someone joked. After a chat amongst themselves, the police guided the man away, out of public view. Soon the same officers were back, giving the crowd instructions.  “If you are going east, or west,” they said, “go to the Danforth, and there you can catch a bus.”
“Do we need a transfer?” someone asked.
“Just get an emergency transfer from the collector booth, or from the transfer machine,” came the official response. It was repeated again for anyone who could not hear, or understand.  The authorities were doing their best.
Yes, I joined the others outside. Eventually, the buses did come, but there were too many people, waiting for it. After a twenty minute wait, I went back to the station, turned to a bystander who quietly waited outside. He was amongst his own thoughts, almost stoic like by nature. He was in his late 20’s, casually dressed, not depressed but patient in the delay. “Did they take him away?” I asked this gentleman.
“Who?”
“The jumper.”
“Yes.”
“What did he look like?”
“Red, like he had been beaten up,” came an observation with a shake of the head. “He looked like he had been beaten up.”
“Glad I didn’t see.”
Nearby an announcement was circulated by the officials that the trains would begin moving in 15 minutes. With that in mind, I went back to the Danforth where the crowd had thinned, caught a bus, and made my way downtown. I planned to resume my train ride at Broadview, where I noticed another ambulance, standing by.  When I made it to the next platform, I turned around and avoided the sight of the train flying into the station. When I work as a technician on film sets, I meet a lot of Paid Duty Officers (PDO’s) and ambulance officials. Whenever I strike up a conversation with members of the EMS, the subject of subway jumpers do come up at the Kraft Service table, where they serve the cast and crew food. “You know what their heads look like after the train rolls over them?” they would say.
“How?! What?!” Me and my lugubrious interests.  “Tell me what they look like!”
“Like a crushed watermelon.”
“Really?!”
“And it all has to be stitched up before it goes to the hospital.  Dead, or alive. ALL OF IT!” Yes, I had to shake my head at that one. “Enjoy your meal, sir,” they would add with a chuckle, looking at what I had to eat and how starved I was.
People do get down. Get together with family. If you have none, call a friend. Don’t watch violent movies, or reality TV. Avoid that guilty pleasure of reading Danielle Steel, or that Harlequin Romance Novel.  Listen to the symphony. Be at peace and just be. Sending good vibes to everyone out there! All the best!
***
Paul Collins, author of Mack Dunstan’s Inferno / Mystery of Everyman’s Way -Contact him on Facebook.
Continue Reading
Black Lives MatterMysteryPoint of ViewRacismRadio and TVWriting Tips
0
Share FacebookPinterestTwitterLinkedinReddItTumblrWhatsAppScoop ItMediumEmail
Paul Collins