If someone told you the same thing would happen in seven years, on the same day, in the Gulf of Mexico – devastating cities, homes, buildings, and people stranded in their homes, you would probably say it simply couldn’t happen.

The Gulf of Mexico is rising up over the beach and water and sand has covered the roadways from Mississippi to Louisiana.  Waves have hit in Mississippi on Highway 90, as waves travel down the road near the casinos, similar to seven years ago. Hit by winds in all directions, and hopes, pop up tornadoes do not do additional damage. 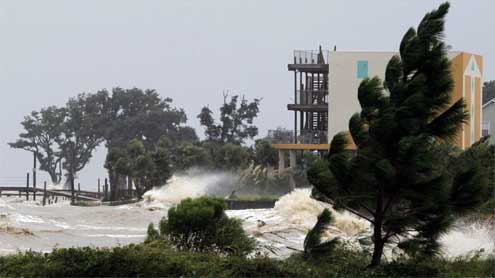 The East Side of the storm is getting the worst of the storm, a storm that is hanging like a star over the coast, and experts think it will be a full day of wind and hard rain.  Evacuations are being extended and even now in places where they had no idea would be part of this storm.  In Gulfport 18 inches or more of water is entering the city, and this is only the beginning of a storm that won’t go away.

In New Orleans the parishes where the damage occurred were fixed, yet they had 42% more to finish every levy.  This is the East side of New Orleans where people stranded in their homes.  The people believed they were safe, most did not evacuate on the eastern side of the city.  At two am in the morning, a woman was in her attic and her husband shot a hole through the roof to exit, and be rescued. More people are stuck inside flooded homes. The water keeps rising over the levy. This could go on for another day, moving at six miles per hour.

What surprises me, we have had seven years to help this city, seven years of repairs barely 1/2 way through. Water is over the heads of the adults, those who can’t swim are in the same shape as they were seven years ago.  This is not from Isaac per say, but from the low levels and the lake near the Mississippi River, over flowing breaking the levies.

One person mentioned that the storm is standing still, was arguing if the repairs were finished they would not be in this situation.  No one knows, where it was repaired the amount of water was over flowing that level but the break happened in a different area of the system.

While this city did not have the funds to fix all that was taken away seven years ago they are now in the same “boat” they were in at that time. A Newsman from the Weather Channel asked when help would be on the way, while talking to the cities Head of Emergency Operations, and he told him, “Not until the wind and the storm slows down.”  Surprised the Newsman was concerned about the stranded people and those alone in one story homes.

Homes are flooded in New Orleans, and people are waiting to leave – pictures on the Weather channel show homes reaching the ceilings of a three story home, a family rebuilt to live where they call home. This woman’s parents lived across the street and their home in the picture is only showing the roof. This is the second storm and no one believed it would happen again – and now – the economy of this country in such bad shape, where is the help going to come from, if not each other.  When asked if this would remain their home the third time around, the young woman could not answer as she told of her mother’s home was on stilts.

St. John Parish is also being hit, and flooding from the Lake goes around and around, staying in one spot and continuing to add up to a flood event, as it did during the last hurricane. St. Parish was in a voluntary evacuation, but there is no end in sight and the rain continues to fall, the wind blows and the people stranded all over the coast.

Many people were under estimating the category one hurricane, as winds remain at seventy miles per hour, levies are broken again in a few different areas, and dumping into the Mississippi River, causing a balloon like lake that is bursting at all sides.

As the storm continues and homes and lives are ruined once again – we must remember one thousand were still homeless during the last storm, and now a second storm within seven years.  As discussed, people spent what they had to rebuild, but when it comes to saving your lives, those things important no longer are, and when they return they are ruined.

During the GOP one of the people speaking laughed about wanting to own Water Front Property, must be they haven’t seen the damage and the devastation of the rain and wind.  What happened to the desire to help others  and can’t someone who is suppose to be helping people retain from a useless laugh.

Follow this storm, the pain people are going through – as the GOP convention is talking and laughing, others are losing their homes, and life long possessions.  Can’t the GOP have some concern, isn’t our country as important as those over sea?  Billions and billions of dollars, are going to be needed to help this area of our country, but they think nothing about tossing a bomb costing billion dollars onto towns of innocent people.  My thoughts, my beliefs, we are wrong, we are Americans and need the help, they are planning “their” future today.