I took Richard Branson’s advice as I often do. I love to share with him and his thoughts, I make “bold moves.” These bold moves have served me well. It is simply is a testament of who I am, what I write, and whom I choose to follow.

The advice of the very successful Tycoon of Virgin Airlines and Virgin Mobile, Mr. Richard Branson, has caught my eye and ears open to what he has to say… because this is a man of serious means, as my great gram Violet would say, I know,… she lived to be 106 years old and you can read about her ancient ways and knowledge in my new film “Cinderella Chronicles Snow Moon”, now in Development in Hollywood with Alan Howarth. 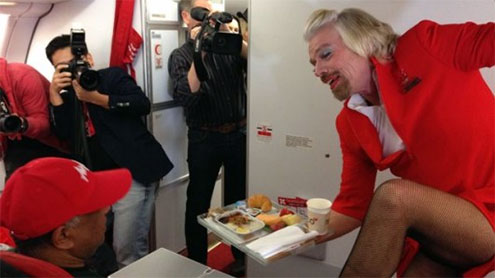 When you want to follow advice, follow it from the top down, not the other way around, as I live my life in a means of loving nature and helping others, at the same time you cannot help others unless you help yourself. In this Article Richard Branson lets you know BE BOLD, Live your life and dreams and don’t be burdened down with other’s problems and issues, you have your own dreams and passion, follow it to the end of the rainbow as I would and Richard would say.

Richard is my guru as of now and I love sharing his truth and messages of truth, he knows how to deliver his lines and speaks to the masses with great and wonderful truths and I do believe he is a great nature spirit too as I…Richard is Bold, and I was born Bold and this is the “why” my admiration for this man and his words, I have always had a saying that has served me well…

The best advice I could give any graduate is to spend your time working on whatever you are passionate about in life. If your degree was focused upon one particular area, don’t let that stop you moving in another direction. If college hasn’t worked out for you, don’t let that put you off. Virgin’s expansion into so many different areas is borne out of my insatiable curiosity to enjoy new experiences and pursue fresh challenges.

You may decide to take a break and consider your options. I would urge you to travel, take on new experiences and draw upon those when it comes to making the decisions that will shape your future. The amount of business ideas that people pick up from travelling the world is enormous. If you don’t want to reinvent the wheel, you may find a business that works in another market that could be adapted for your own. Gap years don’t only have to happen before you go to college. Actually, a good option is to travel instead of going to university. You can work and still have a lot of fun along the way: you won’t create as much debt; you’ll learn an awful lot and may come back with some great ideas.

Equally, if you spot an opportunity early on and are really excited by it, throw yourself into it with everything you have got. Be ambitious. There probably won’t be another time in your life when you have such freedom of opportunity. Grasp it with both hands. If you can’t find an opening that fits what you want to do, why not try to create one yourself? We always enter markets where the leaders are not doing a great job, so we can go in and disrupt them by offering better quality services. Until this week I had never had a boss in my entire life. I lasted about five hours before Tony Fernandez sacked me, after throwing a tray of drinks over him while working as a stewardess on a flight! (It was all for a bet to raise money for charity, so I wasn’t too upset.)

My own transition from education to a working life was pretty straightforward. I started Student Magazine at school and was spending an increasingly large amount of time working on getting it off the ground. The headmaster gave me an ultimatum: he said if I wanted to carry on with Student, I had to stop being a student. So I left to start my adventures in business. Being dyslexic, I never excelled in the classroom and entrepreneurship wasn’t encouraged. I didn’t even know what I was doing was called entrepreneurship until somebody told me!

However, education is absolutely crucial to success and to the progress of the world at large.
As Nelson Mandela said: “Education is the most powerful weapon to change the world.”

But education doesn’t take place in stuffy classrooms and university buildings, it can happen everywhere, every day to every person. I was on a panel at a University in Australia recently and it turned out the only one of us onstage who had graduated was the Dean himself!

I have been offered to do graduation speeches over the years and did accept an honorary Doctor of Technology from Loughborough University. It was strange at the time, but now we have Virgin Galactic perhaps it’s not so strange! I was chuffed to receive it, having left school at 15. It was a hell of a lot easier than going through university to get it! If you are graduating, congratulations and good luck for your future. Every graduate – scratch that – every person has the chance to reach for the stars in their chosen field.