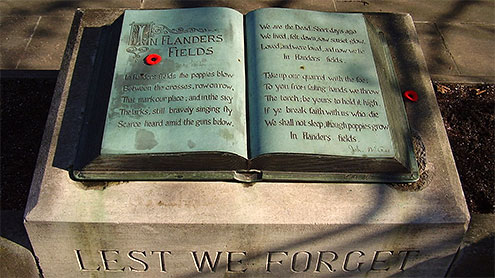 Every 11th November, since I was very young, I pause to remember those who sacrificed their lives in conflicts. I usually become melancholic and reflective.

It is important to me, as I am highly appreciative of those noble souls.
Perhaps not quite for the reasons that some share.

I am educated and I pride myself to be open-minded and researching and think. I know that not all conflicts were noble in intent, and some were cynical beyond belief.

I know the First World War

, the bloodiest of all wars, was not about protecting one’s borders, which was the intent of the allies during the Second World War

. I know the Vietnam war was far from a benevolent exercise.

This isn’t what I am on about. I am talking about the ‘diggers’, as we Australians call the enlisted man and woman, the people who carry out the wishes of their country.

In the First World War, the common soldier and sailor saw the conflict in black and white terms and sacrificed horrendously. In the Second World War, the Allies sacrificed to truly save their lands from conquest. It got muddier, murkier in later years, but the majority of enlisted and the conscripted didn’t see it that way, by and large. They had a job to do. Most loved their countries.

So, in the vast majority of cases, our countrymen who perished in the war died because they served their countries willingly, and with the noblest of intentions. As an Australian, I know that many Australians and other nationals died in the Pacific Theatre to stop my country from being occupied and exploited.

That is why I pause. I didn’t serve in the military and I did not at any stage of my life experience first-hand war. But I hear the echoes of those who did, and they move me. So much more the sacrifice.

I offer a poem by the talented, tragically short-lived war poet, Wilfred Owen, who in fact died in combat a few days before Armistice Day. Lest we forget!

What passing-bells for these who die as cattle?
Only the monstrous anger of the guns.
Only the stuttering rifles’ rapid rattle
Can patter out their hasty orisons.

No mockeries now for them; no prayers nor bells;
Nor any voice of mourning save the choirs,
The shrill, demented choirs of wailing shells;
And bugles calling for them from sad shires.

What candles may be held to speed them all?
Not in the hands of boys, but in their eyes
Shall shine the holy glimmers of good-byes.
The pallor of girls’ brows shall be their pall;

Their flowers the tenderness of patient minds,
And each slow dusk a drawing-down of blinds.

Kidnapping in the Fifties

Prev Next
10 Comments
Leave A Reply
Cancel Reply
Connect with:
Login with Google