On Thursday, February 16, 2012… having just concluded a meeting with my Executive Producer – Dan Sutton – at Dolores Restaurant – I drove down a few side streets in West Los Angeles hoping to circumnavigate the massive traffic on Santa Monica Boulevard.

I went past the Saint Paul the Apostle Catholic Church when the corner of my eye caught some images that prompted my attention.  I parked the car and decided to investigate.  The scene that unfolded before me in the Narthex was that of the twelve apostles, paintings in a neo-Byzantine style in full size.  But as my eyes beheld the beauty of these images I heard the most amazing choir.  I dipped my hand in the holy water and crossing myself entered the church. 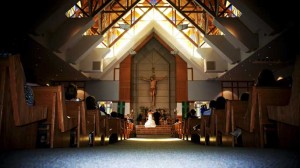 Ahead of me, standing almost at the altar was an assembly of 21 persons, with twenty evenly divided among both sexes led by a gray haired though upright and spry director.  I saw a few adolescents sitting in the side pews playing on their iPads.  The choir was singing Mediaeval music.  My entry attracted the attention of the choir director as I lingered by the door taking in the full view, it may also have been caused by my genuflecting at the center aisle to cross myself.  He said something to me to which I made some appropriately witty response.  I then made my way down the left side.  I really wanted to go to the right side where I saw a large man sized statue of a kneeling Saint Paul, with sword made of wood.  But I was distracted by a beautiful wooden carving of the Virgin Mary Mother of God and of a modern mosaic of Jesus Christ of the Sacred Heart.  I prayed at both and then sat down in full of view of the choir to listen to the rehearsal.

The director took note of me and in between breaks in the practice threw mild verbal jabs in my direction.  At one point he asked my opinion on his choir’s performance and when my response was in the superlative he was both pleased and annoyed at the same time.  I immediately decided I liked him.  He asked me who I was, and when I had the temerity to respond that I was a poet he chose to test me by demanding (he said he expected) two sonnets, in Alexandrian form to be done by the end of his practice session.  It is possible, though I am not privy to his thoughts, that he said this in jest, but I decided to treat it seriously, and so I asked on what subject.  To this he laughed as did several members of the choir and responded with “Sacred Beauty.”  I then went to my car to procure my note pad.  I spent the next twenty minutes writing.  First by sitting in one of the pews and then by sitting beneath the statue of the Virgin Mary.

While I did this, the choir continued to sing.  Naturally my inspiration was the church, the choir, and the altars I prayed at, but at its core I took seriously to heart what it is that the director asked of me.  For it was obvious at that point to me that I had not stopped here by accident as I first figured.  I had been led here.  Later I said that to him after he had introduced himself to me as Mr. Christopher Walker.  “Any relation to Johnny Walker?” I asked, he winked at me.  Why do poets show up in unexpected places?  Is it not because they follow a meandering path led by a distant light that can best be seen in the sacred heart?  This then entered my mind when Mr. Walker suggested as the subject of my sonnets “Sacred Beauty.”

Two neo-Alexandrian Sonnets, requested by Mr. Christopher Walker, dedicated to him, the choir of the Saint Paul the Apostle Church in West Los Angeles and of course to the Sacred Heart itself.

The sacred heart spoke to me in music, divine
While the angels whispered with tears of love and joy
Alight oh soul of goodness for you’re free in trine
I knelt before the sacred beauty and felt quite coy

Alone in the crucible called life I breathed free
The river beneath my feet leapt to greet the air
Air encumbered with sorrowful epiphany
And I touch the elements of light, this I dare

My fingers tingle with words on wings of a dove
My body aches with passion of remorse and shame
I am filled with all possessing feeling of love
The earth shakes, the sky rains down His glorious name

A fire burns out my vision and I am left blind
And all that is left to me is my tired mind.

I stand in darkness so lost and deposed, alone
When a voice calls me from some deep remote abode
Shadows take hold of my feet, and I sink, flesh and bone
When the voice sings to me a bright-lit road

And then the sacred heart lights up again to me
My eyes can see the sky and stars, and all is peace
I am alone beside a vast expanse of land that’s free
Granted a new found grace, on life a new lease

A sacred truth revealed burns in my soul, a brand
Thanks be to God, I have been touched by His hand.

At the exact moment that I finished writing my verses, Mr. Walker concluded his rehearsals and said something to the effect that I was still writing, I was at that point transcribing the messy composition onto a fresh piece of paper.  I assured him that I was indeed done.  The congregation gathered in a circle then and Mr. Walker suggested that after they finish I should read my poem to share it with all of them, I readily agreed.  They sang one last song, asked for individual intercessions, said the Lord’s Prayer, in which I joined and finally waited for me to read my poem.  I then read my poem to them, a poem inspired by all that had immediately preceded it, but that had it not been specifically asked for would not have taken place.  The poem then was an event, and event that had occurred, and as such my act of reading it was the third act of the event, the first being the act of being asked for it.  I linger on this point for a reason.

The poem was asked for at the main altar, composed slightly to the side of it, in between the baptismal font and the statue of the Mother of God.  It was then read right beneath the altar.  I linger then for a good reason, for the geometry of the event lends itself to the verse itself.  At the end of the evening when I had an at length discussion about poetry, syllabic versus accentual meter and music, though mostly I spoke about myself and the director was kind enough to listen, though I did find out he was a composer as well and I didn’t shy away from asking for his help on a project of mine.  Then Mr. Walker asked me whether I was Roman Catholic, and when he heard I was Polish, it was in a way as if he too was confirmed in the sequence of proper events.  You can’t be more Catholic than a Pole, he remarked, though here I paraphrase.  I am quite grateful to him and to his choir for including me in their prayer and for inspiring me to write this piece.  It may be a humble poem, but I think it is the sequence of events as part of which it was composed that may be of interest.