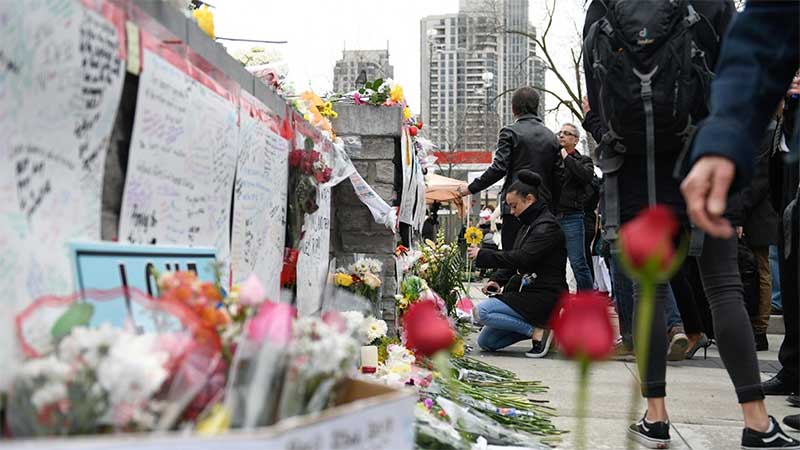 On April 23, 2018, in Toronto, Ontario, Alek Minassian allegedly drove a rented van at high speed on a sidewalk in a peaceful North Toronto area, killing 8 women and two men, injuring fifteen others.

A Toronto police officer Const. Lam, however, stood out from the carnage, arresting the suspect without any more violence. Lam’s courage and bravery earned him praise from law enforcement officials worldwide.

The politicians said their speeches before the corporate media, gaining accolades in the middle of election season in Ontario.

Their sentiments were amplified in Twittersphere and a makeshift shrine was set up at the crime location, including vigils for the victims and the survivors.  Money was raised for the grieving family members and I could go on and on…

One week later, more news reports surface that the suspect was at a detention center, alleging he was wishing that the officer had killed him, but that could be fake news too.

Upon further investigation, the media narrowed their minds on a Facebook post from Minassian, suggesting that he was part of an online community where young men identify themselves as “incels” — or involuntary celibates — because they are frustrated by their inability to find romantic relationships or sex.

That did it! The feminists cry misogyny! In a flicker, the corporate media’s left-wing eye candy condemns the suspect for violence against women. I’ve said on many occasions that I have no problem with immigration because immigrants liven up the joint! I also have no problem with the women’s movement.

If they want more women in government, let them but equality is a word they must remember… but political correctness must evolve, or die! … There I said it.. Any hoot! In the past, punk rockers were in the leftist fringe and they would provoke outrage but now the leftist movement is puritanical–Virtue Signalling is out of control and, of course, leading to the all-important Social Justice Warrior syndrome.

I must admit I am astounded at their arrogance when they expect everyone to apologize, apologize, and apologize! I must make myself very clear political correctness is Western Imperialism where everyone must have one opinion.

If a madman rents a van and uses it as a weapon to kill, causing the greatest massacre in Canadian history–misogyny isn’t the motive. The perpetrator is a madman. Period. The corporate media is using hot-button issues as a weapon to censor public opinions–we are in a world where everyone must have the same opinion–it’s Western Imperialism in disguise.

If you still don’t believe me, look up the archives for the 2016 US election. Didn’t some politician raise a book in the air called ‘It Can’t Happen Here?’

FYI, this story is about a woman who gets elected as president and turns the United States into a fascist state. We can also trot out George Orwell’s 1984 but I feel I have proven my point.

The van attack in Toronto was not an attack on women or even a Terror Attack–it was a madman at the wheel. The corporate media must stop using political correctness to silence differing opinions. Why? We are living 1984.