On Writing the Chesapeake

Hello, some people have wondered why I chose to write fiction about the Eastern Shore of Maryland. The easy answer is that I live here. I moved here nearly 18 years ago and never found reason to leave.

Oh yes, there are things I love and things I dislike about the place – but you could say that about any spot in the world. God didn’t make mistakes, and every spot on earth surely has its own unique beauty and character.

Over the years I have heard many stories about the Eastern Shore and the characters who populated its marshy shores. There were Indians who were pushed aside in favor of white settlers who claimed every bit of arable land for their plantations. There were those who built towns and paid their taxes first in tobacco, and later in various sorts of produce that kept our sons and husbands fighting through a good number of wars. 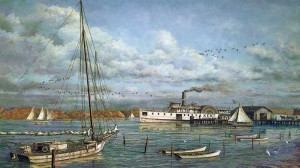 There was the story of Harriet Tubman and Anna Ella Carroll, iconic figures in the story of slavery and emancipation – but there were also stories of quiet people whose names were never mentioned in the history books, which were all too often written by the political powers at the time. Missing, it seems, were the stories of the common farmer and the humble watermen, characters with rich and meaningful stories waiting to be shared.

My Chesapeake Heritage series and poetry in Runaway Hearts follows these unsung characters from colonization through the end of the Civil war, and shortly there will be a new novel set in the same fictional town, about the same family and same farm – the threads of stories that weave their way to the present.

I hope I can continue with this work because it is easy to say that the North won the Civil War, but harder to tell the story of the woman who waited for her man to come home and found him changed.

Ask for my books at your public library, or purchase the books at Amazon.com, Kindle.com, my publisher www.writewordsinc.com, and any number of online booksellers. You are sure to find Chesapeake Country a fascinating place to visit.