The Modern Day Obsession: For all you sadly misguided people out there who will be offended by this I make no apology whatsoever for this post.

In the last few years various words have been employed incorrectly, or have been replaced by a buzzword in a way totally removed from the word’s original meaning.

I heard a police officer recently on a television programme describe the action of breaking down the front door to the house of a suspected drug dealer as “We facilitated a dynamic entry”. What’s wrong with saying we broke the door down?

See below for two further uses of the words facilitate and dynamic, both equally baffling. 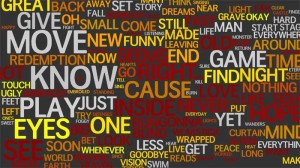 Next I draw your attention to the current cringeworthy obsession in business to state the company’s objectives by calling it a Mission Statement – what is that all about? As far as I’m concerned the only people who can legitimately make use of the word mission when declaring an objective are members of the armed forces across the planet and astronauts when they go into the dark depths of space!

Regarding the word statement, it is either an announcement or an account of an event as when a police officer asks someone to write down what went on in a given criminal situation.

One of my pet peeves is the current obsessive misuse of the word band within the modern pop music industry. The definition of a band normally refers to a brass band, consisting of Trumpets, Cornets, Euphoniums, Tenor Horns, Timpani (Drums, Cymbals, Glockenspiel, Triangle), Trombones, etc, etc. But the last time I checked, a bunch of people singing is either a group or a choir.

A collection of rock musicians playing together could be considered as a group in the loosest possible sense of the word. But they should be correctly referred to as a band because of the use of musical instruments such as guitars, keyboards and drums. Calling a singing group, who use no musical instruments whatsoever a band, is so blatantly wrong.

These days when so-called experts in various fields of human study describe the situation between family members as a dynamic, begs the question, what’s wrong with using the perfectly good word relationship?

Or how about the word facilitate, a current buzzword in many a business – what’s wrong with using the words help, aid, assist, or, to simply make possible?

There is one other that immediately springs to mind.

Within the world of zoology, all species of insects, birds, mammals along with various species of sea creatures, reptiles etc, are all currently lumped together as animals.

Referring to all of the previously mentioned as animals is just so wrong. Mammals like a tiger, lion or an elephant are animals, as are cows, cats and dogs. An ant, a bird or a butterfly is not, nor is a fish, a snake or a crocodile.

For the seriously pedantic among you here are the two words currently accepted when referring to animals and their dictionary explanations:

Animalia – the realm of animals, or the animal’s kingdom

Animal – an animal other than a human, especially a mammal

Give me time and I’ll find even more examples of the total misuse of words.
Feel free to add to the list via the comments box below.
Watch this space…