I watched with great fascination a programme on television last night about so-called ‘ethical’ gold mining, its use and sale. A great majority of the jewelers and gold dealers here in the UK have signed up to an unworkable and unenforceable ethical agreement over the use of child miners of gold in countries where there are no laws covering child labour.

It turns out that practically none of those signed up actually abide by the agreement – no real surprise there. Profit first last and always over human rights, seems to be their motto. 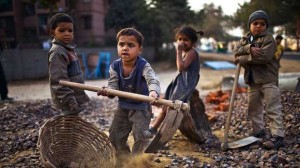 The programme went on to explore what happens to so called second hand gold, old gold re-melted and reused without any need to place anyone in danger. For some quite frankly illogical reason, all of the jewelers interviewed claimed that second hand gold was more expensive due to – and this is the most pathetic reason of all time – serious problems in the supply chain!

When asked how much a piece of jewelry made from second hand gold was in relation to a piece made from freshly mined, the jewelers claimed the old gold product was more expensive because of the supply chain excuse referred to above.

The interviewer traveled to a supplier of old gold in Paris and found out that what the jewelers were telling her was just so much bunkum. The supplier ran through the cost of buying, melting down and reselling the end product bars of gold to jewelers. Guess what, its far cheaper! Any fool can understand and appreciate that fact. Seemingly the manufacturing jewelers can’t.

Each of the jewelers and gold suppliers who had signed up to the totally unenforceable ethical agreement had produced mission statements where they lied through their teeth, paying lip service to ethical mining, even stamping their product with the ethical mining logo.

The interviewer then went out onto a typical UK high street and showed two pieces of gold jewelry to potential buyers – one made of new gold, the other old. She asked the simple question, “If given the choice between the new or old gold, now knowing what I’ve just told you, which would you choose?” With the exception of one young woman, all said they would purchase the item made with old gold. When she told them that according to most manufacturing jewelers, the old gold was more expensive, they were totally astounded!

It appears that a lot of so-called company mission statements are not worth the paper they are printed on.

Buyer beware! Demand to know where your gold comes from.