Michelangelo didn’t want to paint the ceiling of The Sistine Chapel. He considered himself a sculptor. He didn’t know how to work quickly, and in wet cement, which is what fresco painting requires.

He was busy with other projects that he had a real interest in completing. He even fled Rome to escape the work, but was forced back to the dripping cement, the scaffolds, and the extreme discomfort of working with his neck craned upward. He was unhappy and belligerent, if you believe the portrayal in The Agony and The Ecstasy. He was even mad at God for keeping him alive so he’d have to finish the project. 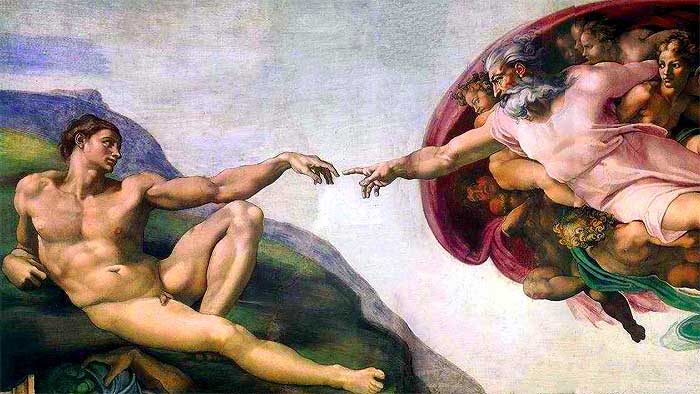 Everyone told Michelangelo what to do…how the ceiling should look, which saints should be portrayed, which Bible stories to use. Poor Mike was so heavily edited by his sponsors that he sneakily put the face of one of them, Biagio da Cesena, on one of the figures in the fresco The Last Judgment, which dominates the wall above the chapel’s altar. The “portrait” is far from complimentary as it depicts Cesena in Hell. (The story is told that when Cesena complained to the Pope, the Pope dismissed him, saying that his jurisdiction didn’t extend into Hell.)

I’ve seen his ceiling twice, once before and once after the restoration. And I feel a personal debt of gratitude to the artist.

I’ve contemplated the meaning captured in the moment where God’s all-powerful finger is about to touch Adam’s and give him life. I’ve examined the detail in The Last Judgment and been reminded that modern man has struggled with the ideas of right and wrong, judgment, punishment and forgiveness, for centuries. And I’ve stood beneath the extravagant images and thought that man was created to be creative, and that it is often worthwhile simply to do the task that is set before you, and then to do it well. And that generations of other men and women from around the world, have craned their necks to look at the ceiling, have had the same thoughts.

The Sistine Chapel is a small sanctuary. It wouldn’t bear notice or comment if not for Michelangelo’s work. It is the art that brings beauty, and adds meaning to the room.

Michelangelo was part of a team. He didn’t see it that way, I’m sure. That’s why he was the artist…and they were just the guys with the money to pay him, and the bare ceiling.

Just some thoughts about the art of writing, on a day-between-drafts.