Men Being Silent About Being Abused

Many people think that a man being abused does not go on, however statistics show that men are abused but many do not report it. 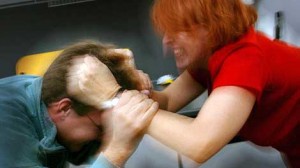 To them it’s embarrassing that they are being physically or mentally abused by a woman. They feel that most people won’t believe them. They will make excuses for their injuries. Some of the feelings that they have and why they don’t report it to the police is from shame, they are worried that the female will turn the table on them and say that they were abusing her, and thinking that no one will believe him. Some men don’t do anything about it because their self worth has been battered as well, and they feel that no one else would ever have them except the woman they are with and they would be alone for the rest of their lives. Some victims just don’t want to make a change or they have small children that they want to stay and protect.

The news lately has been showing more abuse on men, but its still only after the man had been killed by the woman. Then most of the time the women will claim abuse was committed against them, with the man deceased, it’s impossible to question him about the events.

Domestic violence can take many forms. It can be physical, of course. But it can also be purely emotional or economic. Often, there is a combination of controlling behaviors, including:

•Emotional or psychological abuse. This can be verbal attacks in the form of constant criticism, neglect, public humiliation or an attempt to make the victim think he’s losing his mind. The victim can be stalked or isolated from friends and family.
•Physical violence. This is forceful assault that can cause serious injuries and even death. The abuser may kick, bite, scratch, burn or throw objects.
•Threats are often made to try to keep the victim from leaving the abusive relationship. The abuser may threaten to commit suicide or keep the victim from seeing his children again. Other common threats are to withhold money, food or shelter.
•Sexual abuse may include forcing the victim to have sex against his wishes or forcing unsafe sex.

Here are some resources if you’re in Florida. These resources said that they help battered men:

If you are a man and being abused by your partner get help and stop unwanted abuse.  We have to stop the cycle of all abuse.  It takes a whole village of people to stop a problem.