Well, the last starts getting close. Cultivation—or, being cultivated–in the best sense:  knowledgeable and appreciative of human culture in one of its highest forms:  literary art. 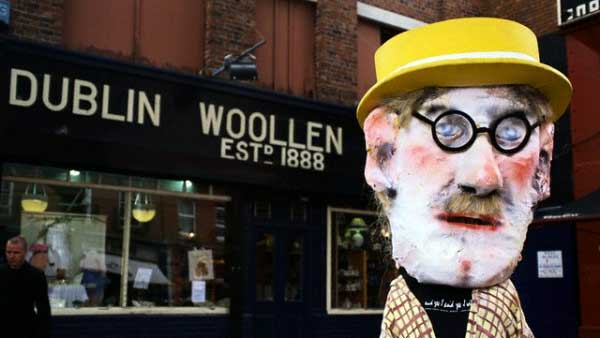 Bloomsday, June 16 each year, is a commemoration and celebration of the journey in and around Dublin of Leopold Bloom, the protagonist of James Joyce’s Ulysses, often considered the greatest novel of the twentieth century.

The practice was formally initiated in 1954, on the 50th anniversary of the events depicted in the novel, when a day-long pilgrimage was organized by artist and critic John Ryan along with novelist Flann O’Brien, who were joined by others who set out to pay homage to the Joyce masterpiece by faithfully following Leopold’s route that day.

The annual event has since “bloomed” and evolved into a potpourri of cultural activities including readings, dramatizations, pub crawls, and various other happenings (often featuring the participants in appropriate Edwardian garb) not only in Ireland, but in many other nations around the globe. Some celebrants dress as characters in the novel, and all partake in appropriate food and drink as they attempt to immortalize the singularly mundane and ordinary Leopold, a man of many appetites but a stranger to fame and fortune—or even much attention or respect.

How utterly appropriate, of course, is the replication of the series of peregrinations and encounters of the unexceptional Mr. Bloom, when in the novel itself he is mirroring, on a much debased, if more intimate scale, the adventures of Homer’s grand Ulysses in The Odyssey. Turnabout is indeed fair play. The sincerest form of flattery is imitation.

The custom is now so ingrained in Dublin life that it rivals their most sacred of holidays in earnestness and gravity, despite the gaiety and frivolity attendant.

Therefore what? Therefore, let not another June 16th pass without your corned beef and cabbage, your Irish stew with a generous helping of potatoes, your Guinness Irish stout, and your shot or two of good Irish whiskey. Put on those kilts and tunics and get ready to sing and dance.

And I wish for you the following:
May your blessings outnumber
The shamrocks that grow,
And may trouble avoid you
Wherever you go.

Love is a Woman