I was watching Charlie Rose a couple of days ago, a round table of journalist dissecting Mitt Romney and his political views. What exactly was he in favour of, what was he opposed to, does  he have any firm beliefs or is he like a reed that bends with the prevailing wind?

Do the Tea Party followers trust him? is he really a solid Republican or a Liberal? his views on health care, does he still believe in policies he passed when in office.

Most felt that his attitude to economic policy was not articulated in an open and frank manner. A business man of great wealth should have an understanding about every day economic activity, how companies operate and the climate in which they wish to carry out business. CEO’s like dealing with certainties, that is why they like the Chinese, no democracy to worry about, no delays or committees to investigate how they are operating. 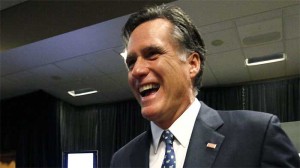 But no politician in the USA could say to the electorate “let’s get rid of democracy and make economic decisions based on what is good for the country”. Is America dysfunctional, can it make decisions that a CEO would take and expect to be carried out? But the President does not have that kind of power.  He can make suggestions, put forward policies, but it is Congress that ultimately has the power over new laws, budget cuts or increases.

A sensible person like Mit Romney, knows that the President is effectively powerless in economic matters.  But he cannot say to the American people “elect me”, however nothing will change without Congress coming together. Both parties have pushed forward their own policies at great cost to the Nation.

Romney is staying clear of the economy because there is nothing to be gained for him. President Obama and the Congressional leaders are locked together in a deathly embrace, stay away from them both is the safest way.

That way Romney will get elected.