Their chicken over there, they're absolutely delicious.
The man not only tenderly tendered a tender, but vested his vest. With the vested remainder of his chicken and a velvety vest to accompany, I feel much warmer. As I departed the restaurant a bird nearly attacked me. The sight of this quail compelled me to quail and quake, which all contemporaneously coincided with an innocuous quake. Interestingly, I quail at a quail, but the inconspicuous quake induced no quake. Nevertheless, I spurred this winter and headed to a spur down south where horses roam, which spurred my interest in spurring horses. It became quite the spur to spur a horse, my very first time. 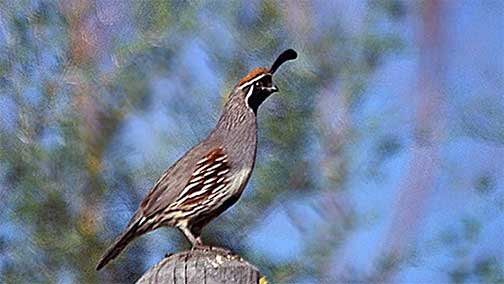 I memorialized this exhilarating experience on a red note, which even the wicked witch woman who observed it read, The red note read, "To two lovely ladies, I too extend my gratitude." The wanton woman was eating a wanton. She then asked, "Hey, look at all the hay. Before I say bye, I want to buy that horse by the ladies' stable…." They replied, "this horse, and its accoutrements, it's not for sale," as they proceeded to sail down the bay.

They could see the sea, as they drank Hi-C. These ladies, boarding the stock, with nothing in stock, needed to stock all materials for their stock, while this avaricious woman cared nothing but her stock; (what she could invest in the horse). She wanted to be the big queen bee, with all honey, and much money, for her honey. Instead, another bird came and defecated all over her like chocolate sundae falling from the sky on Sunday.

Amidst the birds' reign, it began to rain. As the sky precipitated, conditions precipitated this ghastly broad to bellow in big broad bass tones that irritated even bass from afar and beneath her. A herd of fish heard the cacophonous clamors as it reverberated, sending shock waves across the waves…superseding, supernatural acts of nature that only Christ Himself could waive.

To hear these harrowing sounds here, seemed almost apocalyptic. Crowds crowded the seas to see, crowding escape from foreseeable danger. Who knew something so new as a mere minx would set the whole town ablaze like fire wood? Then bats congregated over her heinous head, no matter where she head, and bat this wicked woman down with the force of a dozen baseball bats launched from Yankee stadium to Timbuktu…Squashed like a flee sandwiched between peanut butter and bananas on rye, wry wit only worked against her…She was never seen, at any scene, again!!