This was interesting to write about, with the Seventieth Anniversary of the end of World War II in Europe.

I never thought a lot about this, until I read Killing Patton, by Bill O’Reilly and Martin Dugard. The troubleshooting and problem-solving part of my personality snapped to attention. Many, who’ve read what I write, will realize one of the things I explore is how people interact and power relationships. 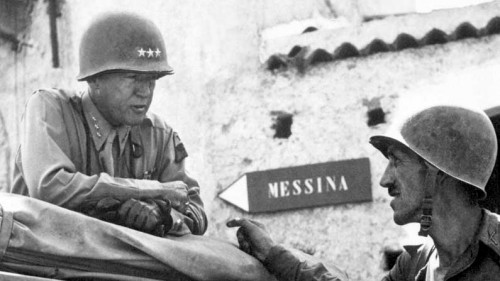 Another book I just finished reading is Who Murdered Chaucer, by Monty Python member, Terry Jones. He presents what that period in English history was like, but makes it clear, while there’s a case for the author of the Canterbury Tales being murdered, everything is circumstantial. None of this will hold up in a court of law.

I bring this up because the same is the case with General Patton. After reading what I’ve read now, I am convinced his motor vehicle accident was “convenient,” to say the least.

I don’t think the accident was an attempt on his life, but I think he could have been killed in the hospital with poison. Even if not killed there, because of his controversial attitudes, I don’t think he would have made it home.

Enough people on our side wanted him gone. I suspect if not murdered then, for many people, this was a very lucky accident. As Terry Jones stated about Geoffrey Chaucer, I am stating the same about General George S. Patton. I can only play the odds, troubleshoot, and make educated guesses, especially because the principal parties are long dead.

I welcome debate and disagreement. My purpose is not to judge, but to analyze. I will present the people I see as the major characters in this case. I will go over their possible motives and see if the beginnings of a case can be built.

Every good crime story needs to start with a victim. In this case, it was General George S. Patton himself.

His exploits on the battlefield are well documented, but two questions need to be answered in symbiosis. Who wanted General Patton dead and why? I will start with that and then proceed to the day of the accident, December 9th, 1945.

The first group would seem obvious. Nazi bitter-enders, who had everything to lose, by Germany losing the war.

Members of the United States Government? This last group would seem to be the most farfetched. As we go on, you will see, not as “farfetched,” as you may think.

General Patton was outspoken in his views. The last straw in getting him removed as commander of the Third Army was when he said the Nazi Party was no different from the Democratic or Republican Party in the United States. Patton wanted the Germans freed so that they could run the needed services.

This is important to remember, but the other factor is that Patton wanted to keep the Third Army together, so he could ride past Berlin and keep going east toward Moscow. To him, the war wasn’t over.

Other Attempts on His Life?

The second possibility, though never proven, was an out-of-control German farmer’s ox cart, which drove a farm implement into Patton’s car, nearly impaling him. Accident, or deliberate, we do not know. The name of the German is unknown; as far as anyone knows it was just an accident.

General Patton had his friend, Seventh Army commander General Geoffrey Keys, spend the night. The following day was to be the day General Patton left Europe to return home. General Keys was supposed to spend it with him but was unexpectedly called back to Seventh Army Headquarters. (He didn’t make it; his car was found broken down five miles from Patton HQ in Bad Neuheim.) ‘

If this is a conspiracy, you need to ask the following questions:

Who called General Keys back to his HQ?

Was his car tampered with, to prevent him from getting back to find there was no crisis or whether it was something easily solved?

Years later, General Keys tried to investigate Patton’s death but could find no way to do it.

At the last minute, General Patton decided to go hunting. His valet, Sgt. William George Meeks, called his driver, Private Woodring, to be ready. The hunting party was to be General Patton and his aide, General Hap Gay. Sgt. Joe Scruse was to bring the hunting dog and the weapons. The destination, was a field, one hundred miles South, in Mannheim, where they would go pheasant hunting.

This leads to a question. If there was a conspiracy, who called the conspirators? It would have to have been a last-minute phone call. This leads to another question:

How good were communications? Germany was a devastated country. How good was the phone system? Did the military communicate by radio?

General Gay: Probably not, unless he was willing to sacrifice himself for such a cause.

The driver, Private Woodring: No, he was completely loyal to General Patton and was planning to be his chauffeur in civilian life.

Sgt. Meeks, the valet: Possible, but it would be a risk. Like recruiting spies, you can look for a motivating factor. Approaching Sgt. Meeks for such an assignment would have been a risk. I am thinking as someone in 2015, Sgt. Meeks was African-American.

While he and the General seemed to have a bond, and General Patton used African-Americans in combat roles and pinned medals on some, he did not like them as a whole.

Sgt. Meeks was also one of Patton’s pallbearers. Could someone have offered him something? It would have been a risk that Sgt. Meeks would have turned the conspirators in.

OK, for argument’s sake such a call is made. Someone wants to stage an accident. Again, knowing the communications, you need to get this together.

Why would you choose Tech Sgt. Robert Thompson for this conspiracy? I will again play as though I can offer him something:

From what I read about him, he was a black marketeer, during the occupation of Germany. He was sixty miles from his post, supposedly joyriding. Was Thompson offered a pass for his crimes? Was he habitually drunk? If so, an alcoholic for such a high-level situation is probably not a good idea. Did his two passengers have a role to keep him sober until they got to the site?

In the Robert Wilcox book, Target Patton, he has a picture of Sgt. Thompson, with a goofy smile on the scene. The three of them had a liquor bottle in the truck. Was that to steady Sgt. Thompson’s nerves? If you’re running a conspiracy, you certainly don’t want your conspirator causing the accident to drive sixty miles impaired.

I watched what Brad Meltzer did on the accident. I ruled out the OSS agent Douglas Bazata taking a shot with pellets to sever General Patton’s spine. As great as Bazata’s career was; he fibbed on this one.

The MP’s. I read about how General Patton told the MP’s to let Sgt. Thompson off. If that is true, of course, the “disappearance” of reports would be explained right then and there because there wouldn’t have been any reports. Look at the other side though. General Patton is seriously banged up. How likely is it for him to think about the truck driver?

General Patton’s injuries: As I stated, I agree with Brad Meltzer’s conclusion about Douglas Bazata not shooting the general. General Patton from his hard riding broke most of the bones in his body. He had embolisms before. He was a tough old cuss but was the wreck that finally broke him.

The Hospital: The trip there certainly would have bounced him around. Could a nurse have injected him in the hospital? Possibly.

Do I think Patton would have made it back to the States? No. Enough people didn’t want him speaking out to make sure he would have been dealt with.

If the accident hadn’t happened, I suspect he would have been killed somehow on the U.S. Navy ship returning home, and he would have just disappeared over the side.

Who would have ordered such an attack? No idea.

I asked a friend who is in intelligence services, (all you need to know), how he would have carried out an assassination of Patton.

Use a captured German soldier, if possible an SS sniper. Someone with skills who would have been a Nazi fanatic and would want Patton dead. You have said sniper in uniform, but then you kill him immediately. Who will question it? Another dead German soldier.

Could there have been a U.S. Government conspiracy? Possibly, but think this through. Who gave the order? How many people were involved? The more people you engage in a conspiracy, the more likely the conspiracy is to collapse. Someone will slip up, deliberate or not, and give it away.

It would have to come from the top. President Truman and as much as he disliked Patton, it would have been hard to cover his tracks.

To conclude, do I think Patton was murdered? Possibly, but would never be able to prove it beyond a reasonable doubt.

The Maiden and the Dragon