It began with a ringing in her ears. At the age of eight, Evelyn Glennie complained of sore ears and hearing loss. A musically gifted child, she had perfect pitch—the ability to identify or sing a note by ear.

But by age twelve she was profoundly deaf. She could hear some sounds but the quality was extremely poor. “I was beginning to become an angry person,” she said. But she was a woman who dared. 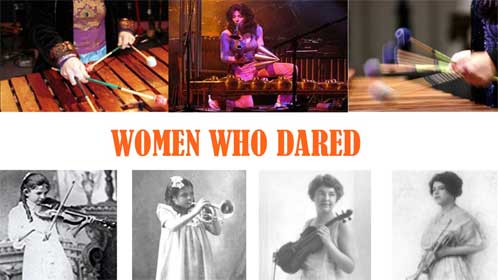 Born in Scotland in 1965, she grew up with her parents and two brothers on a farm near Aberdeen. One day at school she watched some classmates play percussion at a concert and had a revelation. She realized it might be possible to express emotion with percussion instruments.

“Everyone thinks percussion is all about rhythm,” she says, “but every instrument is about rhythm. I was interested more in the color and emotion.”

She began lessons with a percussionist. He placed her hands on the copper ball of the tympani so she could feel the vibrations. When he tuned the two drums to different pitches, one high, one low, she learned to discriminate between higher and lower pitches. “Higher sounds are in the higher parts of your body,” she says. “Low sounds are in the lower parts of your body.”

Eventually, she learned to distinguish smaller and smaller intervals. She now perceives the quality of a note through the vibrations she feels in her hands, wrists, lower body, and feet. In 1982, after mastering various percussion instruments, she applied to the prestigious Royal Academy of Music in London. She met with considerable resistance.

“There’s no solo literature for percussion,” they said, “and no one’s done it before.”

They didn’t reckon on Evelyn’s determination and single-minded sense of purpose. Eventually, the Royal Academy of Music accepted her as a student. She began practicing silently, studying the music to memorize and internalize it, a habit she continues to this day. In 1985, she graduated with honors from the Royal Academy of Music, having won RAM’s highest award, the Queen’s Commendation Prize.

Aware that her limited hearing might rule out playing in an orchestra, Evelyn set her sights on a career as a percussion soloist. In 1986, she made her debut at London’s Wigmore Hall. Subsequent television broadcasts of her virtuoso performances led to wider recognition. Her first CD, a recording of Bartok’s Sonata for two Pianos and Percussion, won her a Grammy in 1988.

In 1990, she published her autobiography, Good Vibrations. That year Modern Drummer magazine readers voted her Best Classical Percussionist. In 1993 she was awarded the OBE (Officer of the British Empire), extended in 2007 to “Dame Commander” for her service to music. She has also hosted Soundbites, a series of BBC-TV programs featuring interviews and performances with musical guests.

Have Instruments, Will Travel

When Evelyn began her career in 1986, solo repertoire for percussion was sparse. Since then she has commissioned 160 works for solo percussion. In performance, she plays barefoot to feel vibrations through the floor and in her body. She performs in colorful, theatrical costumes. A mesmerizing performer, she moves with catlike grace between as few as twenty or as many as fifty instruments.

Of her 1996 performance with the New England Conservatory Wind Ensemble, the Boston Globe critic wrote: “She has technical command, whether playing with four mallets or six, timbral imagination and theatrical flair. [Her encore] was astounding for concentration, velocity, rhythmic clarity and impetus, and for the variety of sounds, she could draw from two sticks and one drum. The end was heralded by an extended crescendo, which Glennie then surpassed by an equally extended, perfectly gauged diminuendo into silence.”

Of her 2005 Town Hall performance, the New York Times critic said: “A snare drum solo might seem an unpromising prospect, but … an energetic and intensely focused performer, [Glennie] made the work’s rolls, rhythmic patterns, and hard thwacks into something both musical and dramatic.”

Read more about Evelyn (and hear her play!)

“As Fleet clearly and candidly tells their stories, Edna White and Maud Powell [faced] daunting challenges: authoritarian presumptions about the “proper” role of women in the world of concert music. Women Who Dared provides a sense of a world in transition, moving towards a sense of gender equality which we have not completely attained even today.” — Howard Mandel, New York City music critic

“… of great interest to those who love music of all kinds. Edna White (1892-1992) [was] a highly regarded trumpet player in the years before women musicians were considered `acceptable’. Maud Powell (1867 – 1919) was a gifted violinist who traveled to Europe to study her instrument. In her brief life of 52 years, she did more for the cause of promoting women as superb classical musicians than just about anyone else! Her life, like Edna White’s, is presented in all of the fascinating aspects that Susan Fleet could gather. This book will add to the important history of the women’s rights movement [and] to the history of famous musicians of the past.” — Grady Harp, Amazon Hall of Fame reviewer

Award-winning novelist Susan Fleet worked for many years as a professional trumpeter in the Boston area. Then she began writing crime fiction. In 2001 she moved to New Orleans, the setting for her Frank Renzi mystery series. Her award-winning crime thriller Absolution was published in 2008. Her second thriller, DIVA, came out in 2011. Her third, Natalie’s Revenge, came out in 2012.

Susan has taught at Brown University, Wheaton College and Berklee College of Music. At Berklee, she created a course about 20th Century women musicians, jazz and classical. Her acclaimed e-book, Women Who Dared: Trailblazing 20th Century Musicians, spotlights the lives and careers of violinist Maud Powell and trumpeter Edna White.

Susan lives a life of Music and Mayhem. She took up trumpet at eight and was playing professionally at fifteen.Then she got in touch with her dark side. New Orleans is the setting for her award-winning crime thrillers, ABSOLUTION, DIVA and NATALIE'S REVENGE. Susan has taught at Brown University and Berklee College of Music. Her e-book, WOMEN WHO DARED: Trailblazing 20th Century Musicians features violinist Maud Powell and trumpeter Edna White. She blogs about crime at http://darkdeeds.susanfleet.com/index.html

The Not so Goodies in our Food