Events that can and often do, devastate us emotionally, can also be used for personal transformation and growth. Some individuals find hope and opportunity in the midst of adversity. They reach out to help others find comfort and healing. Some succeed to change laws, institutions, policies, and assumptions.

Born and raised in Germany, Nicola Geiger lived in a young girl’s dream world; a luxurious home, close friends, material goods and parties galore. By the end of World War II, she was homeless, without possessions and absent her loving family. Her father, mother and one-year-old son died shortly after the war began. 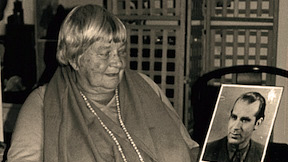 When she was eight months pregnant with her second child she was raped. The child died at birth as a result of the trauma. She was interrogated and tortured in Poland, lost many close friends and her dear husband Rudolf disappeared, never to be heard from again.

Since her losses during the war, Nicola persisted in reaching out to others. Immediately after the war she worked with the International Red Cross and assisted refugees. After studying in England she moved to the U.S., met her second husband, fought against McCarthyism and became involved in the civil rights movement. When they moved on to Japan she became active in visiting the atomic bomb survivors in Hiroshima, waged campaigns for world peace and fought for the rights of Koreans who had been enslaved and abused by the Japanese. When her husband died she decided to move to the Philippines. There she fought for democracy and the overthrow of the Marcos regime.

Ms. Geiger:
First of all, my two children died. One was a baby and the other was when I was eight-and-a-half months pregnant and was raped by twelve Russians. The child didn’t survive. It died right after birth. Fortunately, they found me in these ruins in Berlin. A lady heard me when I cried out for help and she took me to a Red Cross hospital. Then my husband disappeared and I never knew what happened to him. My father died a horrible death at the beginning of the war, which was said to be an accident, but it wasn’t – his legs were cut off while he was visiting a factory. Friends died and the absolute, total destruction of everything from the bombing. It was an enormous amount of simply taking in the losses.

Such losses can never be replaced. You’re totally wiped out . . . your associations and surroundings . . . furnishings that were two hundred years old, furniture, everything . . . so then you realize you are totally alone. 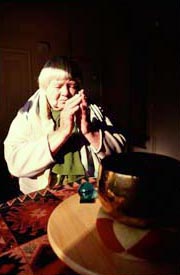 I was very active in helping refugees after the war. I moved to England where I studied theater. I came to America at the time of McCarthyism, where you were better dead than red. I was not going to stay in America one day longer with such attitudes and wouldn’t have if I hadn’t met my second husband. He was a scientist who’d worked on the Manhattan Project. He was really an extraordinary person.

I was very involved with anti-McCarthyism and the civil rights movement. I had never been told, “This is a Jew and this is a German.” I grew up in a socialist family and my father was extremely enlightened, as was my mother. My father was a Buddhist. He sat in the room where I was born and had prepared a meditation mat next to him so I could be put beside him upon birth.

I was very involved in the civil rights movement during the fifties and sixties and I worked a great deal with children in theater in order to empower them. I find the theater to be a tool that is very useful. During the Vietnam War, I continued in the civil rights movement. We lived in Philadelphia. There were sit-ins from Baltimore up to Washington, women strike for peace and Women’s International League for Peace and Freedom. I was really involved with my whole heart then. When my husband went on sabbatical we went to Hiroshima Japan where he did research on atomic bomb victims, whom I worked with as well.

The Japanese had resettled two provinces in Korea and brought Koreans to Japan as slave laborers. In 1905 America and Japan made a treaty in which America took over the Philippines and Japan took over Korea. The Koreans were very badly treated, so I worked a great deal with Koreans in the Hiroshima area and in Kyoto after my husband died. I worked extensively with the Japanese peace movement and with the liberation people in Korea. For a couple years I moved to the Philippines because of my health. I lived with European journalists there and entered into the movement to oust the Marcos regime.

There was never a time when I wasn’t involved. It hasn’t been from an intellectual place. It really came from my own deep understanding of what life is about. The work I did was because I wanted to be in this world. I wanted to live in that light which takes away the occasion of all wars cruelty and control. I really understood, through my Buddhism, that I am the one that must work on myself . . . my ego. This is what I successfully did, in great part because of my experience with suffering.

Two of the major exercises which were brought to me when I was young, were to go over my day at night and decide what was harmonious and what was not. My parents did not speak of bad and good; they spoke of harmony and disharmony. They presented it in a way, because I was very small, that I was very much empowered. If I had done something, thrown a stone or fought with someone, I could go to that person and make it right or more accurately, harmonious.

My parents always used the bell. (She rings bell) The bell was used for settling down. My mother was not a Buddhist, but she saw how its values worked and she and father’s parenting was always together. There was also an enormous group of friends with whom we’d celebrate the change of the year. People would come together. Every weekend there would be music and poetry. It was an extremely interesting and wonderful life I grew up in.

I don’t really know how I managed to survive (the war), but I can tell you what happened. When I was fourteen, fifteen, sixteen, I thought, “I can change the world!” Don’t we all think that? I was nineteen when my father died on September 6, 1939, just six days after the war began. Then there was the attack on Poland and a few of my friends were killed. Then began the registration of food and nobody could travel on trains. Everything was regulated. My father was against Hitler and had voted against him in the election. Did you know he came into power with only thirty-three percent of the vote? A year after Hitler became chancellor he assassinated five thousand people, many of whom were homosexuals, gypsies (and political opponents). Five thousand people in two days! They were all rounded up.

When these things happened I really understood that I had no power; that I had been living in a fantasy; thinking my life could make a difference. I really understood that I was quite powerless, even though I knew many important people. I could go to them but they could not help me. I couldn’t say, “Let’s stop the war.” Then from my own view of the world, because of Buddhism, I really grasped, not so much understood, it really was a grasping, that I was responsible for myself and how I would live and what I would do in the midst of all that was going on. From 1943 on, when the totally destructive air raids came, I really lived day to day.

Why didn’t I have any feeling of revenge? I think this is fascinating. I thought it was futile to do so. I felt that to have these emotions were only hurting me. They didn’t give me any peace. I had feelings, not so much of revenge, but of anger and more anger. I wanted to lash back. But I began to understand very quickly, to grasp, that that would only hurt myself. I had to fight to really center down and my bell helped me with that. I centered down and did my Metta practice every day.

Metta is a Buddhist meditation for loving-kindness. That was the thing to do. In many ways, it’s a great mystery that I could do it. I think it had something to do with all the wonderful people I’d encountered through the years. The German people were not bad people. The people I’d been born into were fine people. In human kindness and helpfulness, I encountered many wonderful people.

So, I did my Metta practice. I didn’t deny my grief. Indeed, I felt it! I tried to commit suicide on my birthday on August 3rd, 1945. I took pills and my friends with whom I was staying came back home after I’d taken them. Luckily they’d forgotten something. I don’t speak of it very often. I was tired. I was so tired of knowing about evil. I was so tired that I wanted to rest forever. It’s really amazing all the things that went on around the world.

When I recovered, woke up and was back in the present, I was really grateful that I had lived! My time was not yet up. Indeed, I realized that I had a task. And each time someone died that was close to me; I carried them with me in their spirit. It’s like they’re marching with me. I’ve demonstrated and manifested in my life what most of the people who died would have done.

Roland of the High Crags (6)