The Elgin Theatre opened on December 15, 1913. Months later, on February 16, 1914, the upstairs, Winter Garden Theatre opened, making it the last operating double-decker theatre in the world.

Next year they will be having their one-hundredth anniversary. So if you are looking for a book launch with class and history, you should check out the place! 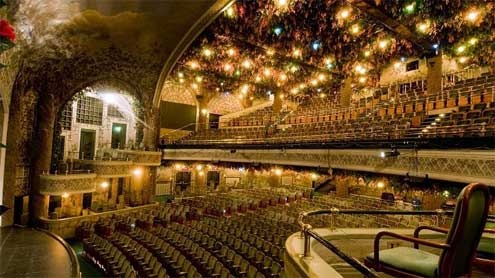 They are open to corporate events, film, and TV shoots, including commercials.  On a guided tour, I even heard about the ghosts that occupy the center. It is said, a saxophone player took a shortcut off the stage, fell, breaking his neck.

I met Ellen Flowers, the Marketing and Communications Manager, in the outside café section which is temporarily open for the Celebrate Yonge Festival. “This Edwardian Theatre, “ said Ms. Flowers, ironically unsure if she meant to say Victorian “is from the era of the Titanic. The Titanic disaster occurred in 1912 and we came to be in 1913. So there was still a class system in place, the upper classes would go to see shows in the Winter Garden, and the middle classes and working classes would go to the Elgin. “

So much occurs at the Winter Garden and Elgin Theatre.  They have had in the past award ceremonies, such as the Canada Walk of Fame and the NHL awards.  “Even when we are dark and have no productions on, we still have lots going on such as corporate events, meetings, or fundraisers, “ said Ms. Flowers, “Last year we had a fundraiser for Colon Cancer Canada that featured  Chantal Kreviazuk. “  The manager then paused to contemplate what else she could add.

“There is Winter Garden Theatre in New York, but it is a regular theatre, not a double-decker theatre.  New York’s Winter Garden is Winter Garden in name only it is not restored to look like a garden, as ours is. “The seven-story complex is owned and operated by the Ontario Heritage Trust, which is an agency of the Government of Ontario. The OHT preserves and protects provincially significant built, cultural, and natural heritage sites.

“It is important to keep the downtown core alive and vibrant with shops, restaurants, and theatres, “ said the marketing manager. “It helps to keep Toronto a place where people want to come and visit, “ added Ms. Flowers before we parted ways.