The extended Hollywood area is home to a number of delicatessens that are nearly as much a part of local lore as are the motion picture studios that populate the district and its environs.

Canter’s Fairfax may be the acknowledged king of the high-piled pastrami hill, but Nate ‘n Al’s on Beverly Drive in Beverly Hills and Jerry’s Famous Deli on Beverly Blvd. in West Hollywood are not far behind.  What better places to sit and chat and have a delicious nosh, meanwhile discussing scripts and casting?  And—now that Schwab’s Pharmacy and its attendant soda fountain are defunct—what better place for aspiring actors and actresses to haunt in an attempt to be discovered?

About a half dozen additional Jewish delis in the area are not quite as well-known to outsiders, but are hardly less popular and venerable.  One is Greenblatt’s Deli-Restaurant and Fine Wine Shop on Sunset Blvd. on the Sunset Strip.  Established in the 1920s, it was as familiar to the likes of Charlie Chaplin and Mary Pickford as it has been later to the Tom Cruise-Dennis Quaid generation, and beyond.

And, unlike most of the other area delis, they deliver.  And, therein hangs a tale. 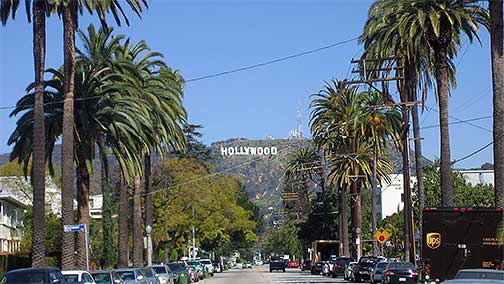 In the mid-70s I found myself with about a year off between college and grad school, and, uncharacteristically for me in those parent-pampered halcyon days, I had to find a job.  The good old Sunday L.A. Times classified ad section had a brief entry:  “Delivery and Stock Man, Greenblatt’s Deli, West Hollywood.  Inquire in person.”

That afternoon I went down and talked myself into what was, to my mind, about the coolest temporary gig imaginable:  delivery boy to the stars.  And that it often was.

Three days a week, 14 hours a day (noon to 2:00 AM)—an interesting way to get in your 42 hours per week.  Minimum wage, but all the tips you could stuff into your pockets.  And tooling around the Hollywood Hills in what I dubbed The Blattmobile—a cheap and run-down little Plymouth Valiant without a functional horn.

In-store duties were done as quickly as humanly possible to furnish more time for potentially lucrative deliveries.  Then into the Blattmobile and away—speeding along with sandwiches and side orders galore, destined for delectable consumption by the great, the near-great, and the never-to-be-great, depending.  The usual delivery boundaries were the western edge of West Hollywood, where Beverly Hills begins; to the eastern edge of the city, where Hollywood proper looms; to Santa Monica Blvd. at the south; up to Mulholland Drive at the north, this route including miles of sometimes tortuous turns in the Hollywood Hills, all without a horn, but buoyed by the promise of big tips while experiencing a brief but memorable up close and personal encounter with the rich and famous.

One found that the temperament and expected generosity of the well-known were impossible to predict, and that there was a wide range:  from friendly and unassuming to cold and haughty; and from munificent to miserly.  In the former group were the gentlemanly and aristocratic aging Joseph Cotton, and in the starkest of contrasts, the affable and rather scattered Monkees drummer Mickey Dolenz.  The lamentable latter categories need no specific names, but they were few and far between.

The former group could not have been better represented than by the lovely and vibrant Sally Kellerman, she of film and song, then still riding waves of recognizability and popularity from her role as the original Major Margaret “Hot Lips” Houlihan in the 1970 movie M*A*S*H.   She came to the door to receive the delivery, then heard the telephone ring, beckoned for her male friend to take over, and rushed to answer the phone.  There followed a Keystone Kops-like scramble for cash to pay the bill, and Ms. Kellerman returned just as I was about to make my departure.  She entered breathless and exhilarated.  “Wait!” she implored.  “Everybody’s got to hear this!  Guess who just called me?  Called me?”  Bewilderment all around.  “Raquel Welch!  Raquel [expletive deleted] Welch called me!”

Turns out, we then learned, that Ms. Welch had found out that their kids went to school together, and took the liberty of finding out Kellerman’s number and calling unannounced.  But the true and abiding point was, from my frame of reference, that Sally was as excited, genuine, and ingenuous as a giddy 10-year-old, and shared her ecstatic moment—a star unexpectedly rubbing shoulders with a bigger star—with a mere unknown young delivery man with as much gusto as she did with her presumed male significant other.  Sometimes, regardless of how Norma Desmond in Sunset Boulevard would have it, great stars do not have great pride.

The Seven Stages Of Editing Grief

Pat Bertram Mar 22, 2021 2
The Best Writing Advice Who gave you the best writing advice you ever received, and what was it? The best…
Publishing