Last father’s day, I wrote about our tradition of King for the Day. I mentioned how Father’s Day came into being a celebration and about my grandfather is my role model on what a Dad was.

This year I want to celebrate my sons’ fatherhood. Two of my sons married when they reached their late twenties while the middle son married at twenty-one. Odds show the younger one weds, the less likelihood of a lasting marriage. 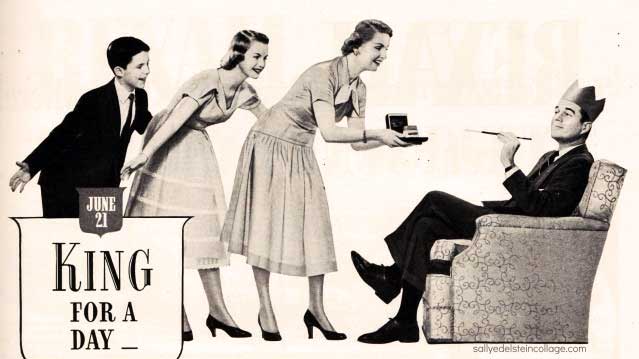 That did not seem to be the case in my son’s marriages but rather the one married at twenty-one is still wed to the same woman who is his perfect companion while the other two, both married late in their twenties, divorced, and are now both happily remarried.

The oldest son never had children except for the ones his wives brought into the union, and he was a warm and honest father figure to them into their adulthood.

The middle son’s two children are as loving as their parents and amiable young adults with enthusiasm in their lives to be an improvement in society.

The youngest son has a heavier burden – one too many in society, fifty percent if statistics are to be believed, where they are absent or part-time in their children’s lives.

He is more fortunate than most, in that he has joint custody of his children, and while he does not have custodial care, he does visit with his children regularly every week. He has never missed a visit. For this, he has rearranged his life, including his work schedule, and living arrangements so his children always know he is there for them.

There are so many dads that have been shoved aside and treated like walking wallets, and for them, this is written. You are vital to your children because you are their father.

A word, a smile, a hug means more than you will ever comprehend. The despair of unfair treatment should not make any time with your children anything less than a wonderment to be together.

Children need a dad’s emotional support and advice as much, if not more so, than if you were in full residence.

Children are not pawns to be moved about in a game of war with an ex-spouse. They should be nurtured ensuring future generations a better chance at happiness.

Treasure the time you have with your children – may your days with them be joyful, so they also can appreciate your role in their lives and hearts. Happy Father’s Day.