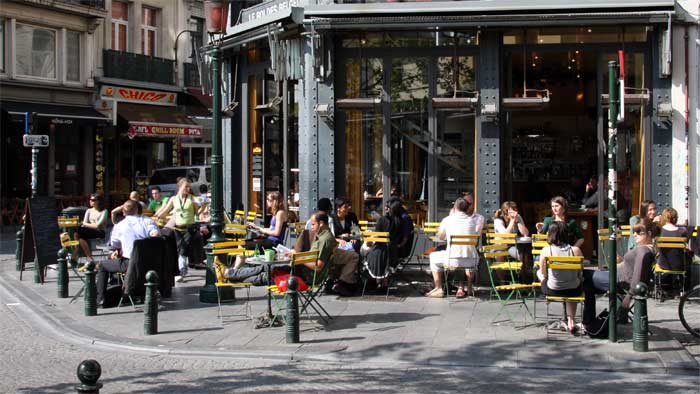 It was on a gorgeous afternoon that I sat at an outside table of a local downtown coffee house and took an unexpected voyage around the world.

I had just put my derriere on a metal chair (made in Italy) and was waiting for my friend Betty (originally from Chicago) to join me with pictures of her recent trip when the woman at the next table asked about the emblem on my shirt. I told her it was an Iranian National Soccer Team patch.

She asked if I knew someone there and I said our family had an Iranian exchange student live with us for a year when I was growing up. She explained that she and her husband, who had just joined her, were fans of Majid Majidi and other Iranian filmmakers.

She introduced herself, her husband, and their child (Sylvie, Richard, and Marcel), just as Betty sat down with her Guatemalan coffee.

Turns out that Sylvie and Richard (Oxman) put on a political/international and cultural event (including documentary films) which is called OneDance and includes filmmakers, educators, and activists from around the world.

They are also the proprietors of French Paintbox. Several times a year they organize retreats in the Southwest of France and meet participants from around the world. It doesn’t sound like your ordinary tour, as those on the trip have the opportunity to study and paint daily with master teachers such as Isabelle Maureau from l’Ecole Nationale Supérieure Des Beaux-Arts De Paris.

As their son Marcel, who looks like a miniature French movie star, came up to tell me that we both had on the same colored shirts (white), I thought about my wife’s French connections. I mentioned that my father-in-law spoke five languages and that he had lived in France for many years and that he and his wife (my mother-in-law) are originally from Germany.

My friend Betty and her son both speak French, as does her husband (whose family goes back to Nova Scotia). Betty, obviously not thinking, asked if any of my children speak French. She should have known that that could send me on a long torrential downpour about my kids.

I looked down at my tennis shoes (made in China) and told them about my daughter, who traveled to Eastern Europe with her husband, and how much they liked Italy, The Czech Republic, and Turkey. Our other daughter was in Tahiti for three months, as part of her college studies.

Two of our sons have been to and loved, Ireland and England and some of our best friends live in Sweden, I concluded, realizing I had never answered the question about speaking French.

Sadly, I finally admitted, I don’t speak French or any other language, besides English, but both our daughters can speak Spanish, my wife German and youngest son took French for a year and a half in school. I’ve been trying to learn Kinyarwanda, which is spoken in much of East Africa (especially Rwanda), but still only know a few words.

After Sylvie, Richard, and Marcel naturally tired from my monolingual linguistics, having heard all about my wife’s three-month trip to China, Cameroon, and French soccer teams and world politics, they politely said their ‘au-revoirs.’ Betty was finally able to get a word in edgewise and told me about her trips to the East Coast, Nova Scotia, and Nigeria.

About an hour later I walked past a World Bazaar retail store, paid my parking garage ticket (with American dollars), got in my Japanese car, turned on some Brazilian music, and drove past Mexican, Sri Lankan, Thai, Indian and Afghani restaurants to my friend’s home on an Italian named street.

I’d only been at the restaurant for a couple of hours, but it seemed like I had traveled the globe. It was a pleasure meeting the Oxmans, hearing about French Paintbox and talking with Betty; but quite ironic that I, a stay-at-home American native, had felt like such a world citizen. For the price of an espresso (coffee from Nicaragua), it was definitely the cheapest trip I’ve ever taken!

The Last Thing On My Mind