I decided to cover these “species” of zombie next in my field guide because they fall somewhere between tech zombies and biologicals, and in some cases are a little of both.

I count these as any type of zombie that originates from an environmental source, one that would not be directly attributed to another biological organism like a virus or parasite. Some lean towards tech, like radiation-spawned atomic zombies, chemical-toxin generated zombies, or the victims of “space dust.” 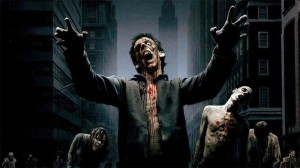 Others are more closely tied to natural causes, like those that can be blamed on natural toxins or some type of genetic mutations triggered by some outside effect – I’m going to reserve my discussion of mutations, however, to biological, because this is often associated with a viral-based apocalypse. One of the interesting traits these zombies possess is they typically don’t tend to spread other than by the source spawning new zombies – not zombie to human effects creating a new zombie (although those slain by zombies in the radiation/dust/toxin-stricken area do rise and join their undead brethren. )

Atomic Zombies:
These radioactive shamblers can be found as early as the 1950s and in 1968, they can be found in the George Romero classic, Night of the Living Dead. It is radiation from some source that causes the undead to rise in those instances. As I mentioned in the last post, zombie origins are often associated with existing societal fears, which is why these zombies were popular in the day where fear of the atomic bomb ran rampant. As tensions regarding nuclear warfare and mishaps eased, this type of zombie became less popular. With the recent occurrences in Japan, however, these zombies are threatening to resurface.

Cosmic Dust Zombies:
The earth passes through a cloud of space dust, and suddenly the dead begin rising. A thinning ozone layer, comet tails, solar flares and other extra-terrestrial phenomena are both alien and fear inducing – hence they exist as a source of zombies. Examples of this type of zombie can be found in “Fido” a delightful dark comedy where the undead are harnessed as a means of slave labour and where people pay outrageous amounts of money for a “proper” burial to ensure they are not enslaved after they die (a Canadian gem.) This is commonly found in stories where the focus is less on where the zombies came from and more on the social impact of those zombies, in part because the apocalypse comes without any attempt at a technical explanation.

Toxic Zombies:
This type of zombie usually originates from a manmade chemical toxin, as in many B grade zombie movies in the 80’s and 90’s, such as the 1980 flick Bloodeaters, where the zombies are caused by crop-dusting chemicals. Green was an “in” thing in those times, and environmental poisons, a result of human carelessness, a real threat. The fears of industrial poisons are still there, but they’ve extended to natural poisons and the potential dangers of genetically modified food. You’ll find this kind of zombie in my coffee-house zombie tale, “Waking the Dead” appearing in the May December Publications anthology “Hell Hath no Fury”, where the problem is imbibed. It touches on the idea of biologicals as well, which I’ll be addressing in my next post.

You can find the above mentioned anthology at:
http://www.amazon.com/Hell-Hath-Fury-Elsa-Carruthers/dp/0984537295/ref=cm_rdp_product