I’m going to turn to what is currently the most predominant zombie – the one of biological origins. Be it viral or some form of parasite, the “infected” zombies come in varying types.

Some have perished and risen from their graves and others have never actually died, but are merely diseased, mindlessly driven to feed on human flesh. Some are fast and raged filled, like the zombies of 28 Days Later, others are slow shamblers, moving in contagious mobs, like in Dawn of the Dead. 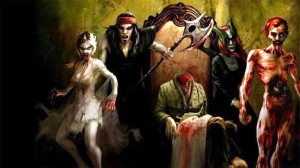 Most zombies now days have assumed this form, the result of prevalent fears caused by outbreaks of illnesses like SARS, Avian flu, H1N1, AIDs and the less common but more deadly diseases like Ebola. It is a very widespread human fear, one than expands as our populations grow and urban centres become more congested.

Add in anxiety over genetic manipulation of viruses in an attempt to create cures to things like cancer, at the root of one of my favourites, I Am Legend, and it is no surprise that biological are the most popular source of the undead in current media.

Parasitic Zombies:
Although less common than their viral counterparts, some zombies are spawned and spread by parasites. Perhaps their gruesome factor is a little too much for the average zombie story, so they don’t have as much in the way of mass appeal. There are examples of alien parasites, like the tongue-like creatures in Slither, but not all are extra-terrestrial.

Some such parasites actually exist in nature, infesting and controlling ants, grasshoppers, cockroaches, spiders, wasps, worms and snails. Toxoplasmosa gondii, Hymenoepimecis Argyraphaga, Glyptapanteles, and more are real and present in our world. I even referenced one of these parasites, the Leucochloridium variae or brown-banded broodsac, in my zombie novelette, Escarg-0, that appears in the anthology, Zero from May December publications. You can find it at: http://www.amazon.com/Zero-Chantal-Boudreau/dp/1936730103

Viral Zombies:
Viruses are something even our scientists don’t entirely understand, and it is well known that we fear what we do not understand. Not quite meeting the definition of what is alive, viruses need other life-forms to replicate. Viruses can be airborne, transmitted by touch or by bodily fluids. With a viral outbreak as a source, zombiism can spread rapidly with the only means of prevention being avoidance unless some form of vaccination can be developed. In my opinion, it is the simplest and most obvious means of transference, and with the way viruses are known to mutate without warning, there is no need to go into great detail as to how such a thing could happen. It seems to be the preferred origin of most modern zombie literature, evident in works from World War Z to the book I’m currently reading, The First Days, by Rhiannon Frater. I used this source in several of my own stories including my cowboy zombie tale, What A Man’s Gotta Do, appearing in Rymfire ebooks anthology, Undead Tales.