Google the word ‘gun’ and the first thing that pops up is a website advertising used guns for sale. From military rifles to long arms, used lever action guns to single shot rifles, antique guns to reloading gear, hunting rifles, and even shooting accessories, usedguns.com is dubbed Australia’s number one gun website.

According to Lisa Davies, Crime Editor for the Sydney Morning Herald, a recent University of Sydney study revealed that Australians now own as many guns as they did at the time of the Port Arthur massacre in 1996. With the youngest victim only three years old, and the eldest seventy two, Martin Bryant was able to purchase a semi-automatic through a newspaper advertisement and go on a killing spree in which thirty five people were killed, and twenty three were wounded. To this day, the Port Arthur massacre remains one of the deadliest shootings worldwide committed by a single person. 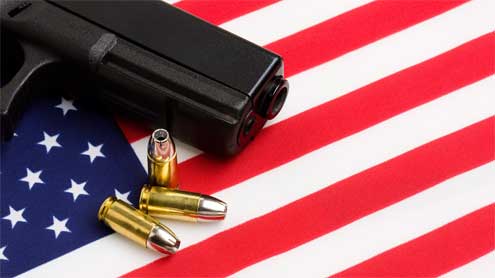 In light of this, one would assume that countries outside of Australia would follow suit. But this is not the case.

Under Connecticut law, Lanza was old enough to carry a long gun, but too young to legally own or carry a hand gun.

The US has the highest gun ownership per capita in the world – nine guns for every 10 Americans – and Lanza’s mother, a gun enthusiast, legally owned ten weapons, all readily available for her son to use.

Because of this tragedy, US President Barack Obama is now re-evaluating American gun ownership laws. However Larry Pratt, executive director for Gun Owners of America, told ‘Fox News Sunday’ that they did not think there was much likelihood Congress was going to move to change gun laws because the Second Amendment to the United States Constitution protects the rights an individual’s rights to poses and carry firearms.

The American government has had ample opportunities to change and fix gun regulation, but they chose not to, as the NRA has such a strong influence over American politics.

It seems the only thing only thing left to do is to change a 226 year old document.

The United States has transformed since 1787. American law and political culture Change US Constitution and Start Saving Lives has changed. It is no longer necessary to include the second amendment.

Early American settlers viewed The Right to Bear Arms important to deter tyrannical government, repel invasion, suppress insurrection, facilitate a natural right of self-defense, participate in law enforcement, and enable the people to organize a militia system. But in today’s society, this is no longer the case. Americans are protected by government militia and law enforcement.

In the last 50 years, 15 out of 25 shootings occurred in the US. Since 1982, there have been at least 62 mass murders with guns in the country. Minors are 13 times more likely to be to be murdered by a gun in America. And yet despite this, America still will not change their gun laws.

Americans may not change their gun laws because of the pride that they have in their Constitution, but changing the constitution might mean there are more people left alive to take pride in their country. How many people have to die before something is done?

Gun laws might not stop criminals from committing crimes, or following laws, but at least it would make it harder for them to obtain a weapon.

Claire is a content writer for Student View and Elance, and is looking to expand her contacts.She is available for on-line content writing, with her expertise in government, health, business,literature, and politics. Claire is currently completing a bachelor of business at Griffith University.

DIVA: A Demented Stalker, a Sexy Flutist, and Murder!