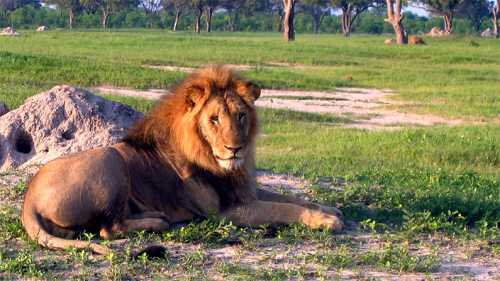 Why do people care about Cecil? Lots of lions and other wildlife are killed in Africa, regularly.

I am going to cover my feelings about this, some of the cases, and why I think the way I do.
It would be hard to miss the basic story. A suburban Minneapolis dentist, Dr. Walter Palmer killed a lion named Cecil, who with a carcass was lured out of the protective zone and killed.

We’ll get to the moral issues later. I will start with how I see all this.
I can’t imagine the amount of money involved to shoot wildlife in Africa on safari, whether it is with a camera or a weapon.

From where I sit, the only way I’m going to East Africa is the cheap way on buses and trains, with my Rwandan partner in crime, Anastase, retracing some of the steps he took, after he fled Rwanda. There will be more about Rwanda later, in this essay.

Now for Dr. Palmer. I saw the story about his vacation home being vandalized. By vandalizing his home, the people who did it have hurt their cause. They have become in some ways, as reprehensible as they think Dr. Palmer is.

Also, in social media, there was an encouragement to post vitriol on the review website Yelp. This is also wrong. The purpose of Yelp is to review businesses. If you dislike Dr. Palmer as a dentist, Yelp is the place to say that. Yelp has the right to remove non-review posts and is right to do so. For them not to do it, makes other businesses vulnerable to non-related posts. If you feel that strongly, participate in a forum, specifically for the purpose. You will get plenty of hits on Google.

If you are that angry, his patients for example can use people’s power and not go to him as a patient. Sign a petition to get him extradited if you feel that strongly.

Now for Dr. Palmer. The first thing I’m going to bring up is a piece of cynicism. My cynical side says, fifty thousand dollars for the hunt? We are not even counting Dr. Palmer’s trip from Minneapolis to Zimbabwe. He is putting his trust in guides for a lot of money. Using the carcass to lure Cecil was not right. Cecil was a protected lion being used in a study. In other words, I am not condemning the hunt per se, but hunting that particular animal.

If Zimbabwe seeks extradition, should Dr. Palmer be turned over to the loving embrace of President Robert Mugabe? Unfortunately, yes. We have an extradition treaty with Zimbabwe. If we do not honor it, what if Zimbabwe captures someone who harmed us and treated us the same way? Are we going to send the 82nd Airborne? Just thinking out loud.

I realize if President Obama honors the extradition request, he will have done the smart thing politically for the future, but I can hear the hue and cry from certain quarters. He is part African, so gave into another African leader. Obviously wrong, but you know you will hear it. (I’m not keeping a record of how many things I’ve backed President Obama on, but would have to back him here).

If I were Dr. Palmer and were being sent to Zimbabwe to face trial, I would weigh my few options and would consider suicide as one of them; for President Mugabe is not a fan of white people. You don’t need to take my word for it, read his speeches and history.

Would I go hunting? Under the right circumstances, yes. Do I need it to prove how macho I am? No. I like to look ahead and take charge, but by the definition of macho, do not need to prove it. Like Nike, “Just do it.”

I can imagine the outrage of the PETA members now, but here it is. The first humans hunted for food. Humans also took human trophies and there was cannibalism. We humans are a complicated bunch. OK, I am off track. I would hunt for food, not just for myself, but also to feed others.

Would I hunt big game in Africa if I had the chance and do it legally? Yes, but not on a canned hunt, where I am assured winning. I have to be able to use skill, and there has to be a risk. I am doing it as a skill, not to prove toughness. Again, whatever I hunt has to be used.

A friend of mine hunted as a young man, and he had a good idea. If you just want to trophy hunt, and you are not going to use the meat and skins, shoot tranquilizers instead. While the animal is asleep, get your pictures and move on.

The right thing to do is to share what you kill with the local community, which may be very poor. If you have already paid that much to travel to a nation like Zimbabwe, help the local people. Don’t just feed them, ask them what they need. Don’t be patronizing, be sincere and help. Dr. Palmer could have helped local kids with dental issues, for example.

Genetic and tracking studies should be done to better check migration routes and work with the gene pool of the different animals.

Unite economies. As though she needs another thing to do, one of my favorite brilliant people is the Zambian economist Dr. Dambisa Moyo. (She is also the world’s sexiest economist, but you can yell at me for that later). Get her involved with helping the economy of hunting in these regions of Africa. Have wildlife biologists involved for the genetics and conservation experts? This will have to cross borders in Africa because animal migrations surely don’t care about human borders.

What’s in a name? Why do we care so much about Cecil? He had a name. He was identifiable.

Do animals have souls? I don’t know, but I do have a cat named Pandora. I’ve had cats all my life. I don’t know about souls but, they all have personalities, or should I say, Felinalities?

You can have a relationship with a cat. A lion is a little harder.

Quoting that great democrat Joseph Stalin, “A single death is a tragedy; a million death is a statistic.” How many nameless lions are killed by local poachers?

The deaths of six million Jews in the Shoah or Holocaust matter to me, because I’ve known people, who survived the camps and had family who died in them.

In 1994, Rwandans slaughtered one million of their countrymen and women in three months of barbaric madness. I cared in the abstract sense. I could do nothing about it. It was not up close in personal.

Now being friends with my friend and adopted brother Anastase, I have a face, name, and a human being I see at least five days a week.

I can sum this up simply. What’s in a name?