In North America, the evening news is dominated by talking heads who not only read the news, but also determine what constitutes news for their audience.

For several years, our small household has ground to a halt at 6:30 every evening to watch Brian Williams on NBC. He always looked suave – handsome in a crooked-faced mischievous way, always wore an immaculate silk tie, had unchanging hair, and the steely-eyed authority that brought to mind the American frontier with it’s John Waynes and Gary Coopers. Brian was a friend, who had a standing invitation to join us at the end of each weekday and tell us what he thought we needed to know. 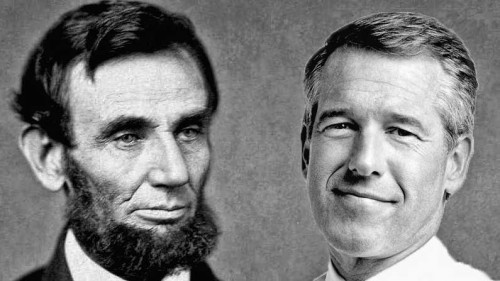 On the weekends, our other news buddy Lester Holt took over at the big desk. And I trusted him as well. Liked him as much as Brian. Admired his tie too, but also his beautiful bespoke suits.

But the broadcast wasn’t perfect. Over the few years, the NBC Nightly News has changed, and all the splendid suits and ties couldn’t hide the fact that standards are slipping.

There’s been less and less real news, and more trivia and feel-good segments that don’t matter to me, watching as I do from Canada, and that shouldn’t matter to most of NBC’s audience if they’re looking for a newscast. Weather has become a major theme of the broadcasts – snow, tornadoes, hurricanes – and natural disasters like local flooding or wildfires. I remember the days when weather was a 5-minute update just after the 5-minute sports update at the end of the broadcast. I haven’t been able to get my head around weather-as-news. I suppose the benefit to NBC has been the guarantee that no matter how much you report on rain and wind, there’s bound to be more tomorrow. But the stories don’t inform me – they make me feel like a voyeur.

Another change has been the annoying habit NBC has of repeating the news from the weekend on Monday. Or even on Tuesday. The news has stale dated by then, but Brian didn’t seem to mind repeating it, and showing the same old video as well. I suppose he thought that people who’d miss the stories on Saturday or Sunday would need to hear them on Monday. But if you hadn’t missed them, the reports come across as redundant and make me question the work ethic of the news team, which I’m sure is not what NBC intends at all.

And lastly, sensationalism has triumphed over rationalism in the newsroom. We need to know about the Middle East. We need to know about the Ukraine. We need the anchor to explain the politics and their implications to us, the things we are doing in those places by proxy through our governments. An American sniper may be a hero to some, or even to many, but how can his story be news today, and almost every day for two weeks, when he’s been dead for 2 years?

All this to say that I’m not surprised to hear that a news anchor has lied, misremembered as he says, and covered up. People blame Brian for his behavior. Fair enough. But surely the fight for ratings played a part. NBC and others have made a shambles of news reporting in the quest for viewers. And their efforts have backfired. There’s a reason so few people get their news from TV anymore…because there’s so little news to be had.

As the late great Abraham Lincoln famously said, “If you want to test a man’s character give him power.” We all know as a platitude that power corrupts. I hope for justice for Brian and for the viewers at NBC. For truth. But I know that the more power, the bigger the test and the more opportunity for absolute power to corrupt absolutely. Now that the heads of NBC have the power, it’ll be interesting to see how they handle it. Now that Brian’s lawyered up, it’ll be interesting to see how all this ends.

When the lawsuits and suspensions are over, I wonder how it’ll all get reported. Especially if there’s a hurricane that day.

How to Create Spontaneous Images

Caryl McAdoo Feb 10, 2022 4
Story Composition The Three Acts of Life – and Your Stories Every story has three parts: the beginning, the…
Science