No one could be more saddened to see the closing of the Borders Bookstore chain than Clay and I. Borders will always have a special place in my heart, because it’s the place where we not only met (as I was signing copies of my novel The Perfect Shoe), but where we also married.

Yep – right in the middle of Borders Bookstore.

I’ve always had fantastic book signings at Borders, using my awesome creative talent mixed with a little salesmanship to quickly sign 100 books in a two hour period without even having to advertise the signing event. Because of this, my local Borders would let me do pretty much anything I wanted in their store…including have my wedding there. 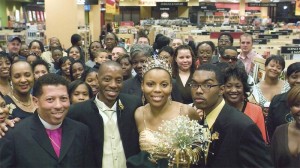 The full story of how we came to have our wedding at Borders, though unique and beautifully unorthodox,  is actually quite sad and tragic.  I’ll keep it short. (Click below to enhance your reading experience.)

Clay and I had planned a beautiful church wedding, with all the white bells and whistles that any bride would have dreamed of, planning to wed on a cool Sunday evening. I’d stroll down the aisle to Chrisette Michelle’s Golden, in a golden gown, with a bouquet,  not of flowers, but a handmade bouquet of gold and clear beads and wire.

We’d planned some pretty unique things – Clay was to put a toe ring on my toe, we’d do a sand mixing ceremony, and there was to be a six-minute portrait painting on a huge 8 x 5 canvas, while Fred Hammond sang “No Greater Love”. (Yes, we had found an incredibly talented artist who had practiced dashing paint on the canvas and creating our images in just six minutes).

At the time that were planning our fabulous day, I had just completed writing my novel A Little Hurt Ain’t Never Hurt Nobody, which captured every wedding detail perfectly, knowing that we’d be married before the book released, and had submitted it to the publisher. That was the closest I’d come to actually having that wedding. Tragically, with no advanced warning, and out of the clear blue sky, Clay’s father suffered a heart attack and suddenly passed away on the eve of the wedding – just before the rehearsal dinner. As you can imagine, Clay, his mom, and his brothers were devastated.

Naturally, the wedding was postponed as Clay’s family was consumed with shock, grief, and pain that I can’t even imagine, as both my parents are still living today.
Anyway – fast forward to six months (and several thousand dollars, outdated invites, a stack of favors, a huge unpainted canvas, an unused limo, a lost reception, honeymoon cancellation fees, and so on and so on) later.

We still wanted to get married but the thought of re-doing a huge day was overwhelming for Clay. I couldn’t possibly force him to try to recreate an event that would surely bring back such painful memories, so . . .
I’d already nailed down a signing event at Borders, and as always –  I was looking for that extra creative edge to make the signing explosive, so I said . . .
“You know what would be cool?”
“What?” Clay said.
“If we got married at the very place we met.”
“At Borders?” he asked?
“Yep.”

In our minds, we ran through the logistics, and gave Borders a call. They agreed to let me set up our 11 foot arch, decorate it with tulle and flowers, which I used as the backdrop for my signing event that day, then allowed me to use the manager’s office as a dressing room where I got my make up done, changed into my gown, and glammed up. While I primped in the office, our friends showed up, having been invited via Evite and word-of-mouth only a few days before, gathered between rows of books and waited for my entrance.

Instead of Chrisette, Jamie Foxx serenaded my walk with When I First Saw You, (click below to enhance your reading experience).

Wedding cake was then served to our guests in the cafe portion of the store, where they greeted and congratulated us. And when I least expected it, Clay got down on one knee and slid a beautiful gold toe ring on my toe…just like I’d wanted.  How’s that for African American Romance?I held my custom-made bead bouquet (which I still have by the way) and my son Drea escorted me down the aisle, with my train following. Clay, in his tuxedo, stood waiting under the decorated arch, flanked by Davion (serving as the best man I suppose), and our Pastor. No parents, no family, other than Drea and Davion – just whoever made their way out to Borders that evening.

Every customer inside (and outside of Borders) watched us exchange vows, and we did get Fred to fly back out (via CD) to sing for the communion and sand mixing part of the service.  Shortly after, was the big kiss, which included a large dip on the end, for which I had to hold on to my tiara, and we were introduced for the first time as Mr. and Mrs. Clay R. Hooker Jr.

In the whole scope of things, it was as memorable a day as any wedding could be . . . and I sold A LOT of books that day too.  *wink!*

Too bad Borders is gone now . . . but we have pictures to show that it DID exist!

Her first book, Promise You Won't Tell Nobody, was self-published in 1997, and was followed by a sequel, Fruit of My Womb. She achieved national attention in 2006 with her third novel, The Perfect Shoe, (published by Kensington, under the Urban Soul imprint) a romantic comedy and carries a 5-star review at Amazon.com

She has worked collaboratively on several fiction and non-fiction writing projects to include Felton Hawkins' Building a Great House, Olivia D. Stith's Is Boaz Lost, or am I in the Wrong Field, Dr. Larry Brayboy, The Black Church in America to name a few.

Her most recent work, Spoonin, released in June 2011.