She’s an award winning novelist and screenwriter with a new novel, and a very modern business plan. Jen Frankel’s new book is the first in a planned series of four with a very unique take:  it follows the heroine from ages thirteen through thirty-five. 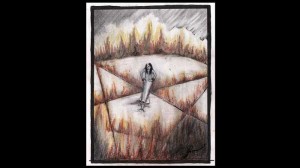 In the first book, The Last Rite, Jen’s hero, Maggie Stuart discovers she has occult powers that make her a pawn in an ancient battle for supremacy. “Maggie is an every girl,” said Frankel at Starbucks by the Old Chum City building at Rosehill. “But she will appeal to the darker side in all of us.”

Jen has been published widely in the United States in a myriad of literary magazines. A few years ago, she placed second in the Vancouver International Three Day Novel Competition with a 54,000 word autobiography. “I’m a bit of a binge writer,” says Frankel.  Still, she was unable to make headway getting either an agent or a publisher. Frustrated with traditional publishing, she took her manuscript to www.lulu.com .  “This way I can control how I spread my name, and get the book out to its potential audience on my time. I don’t have to wait for the publisher’s backlog to clear up.”

She launched her http://www.indiegogo.com/the-last-rite campaign to raise money for a publicity blast. By doing so, she’s increased her social media presence on twitter, www.linkedin.com , and facebook.com that will help when she goes on the road to promote the novel. “I can’t wait to get out to those fan cons!” The Indiegogo campaign runs until midnight, June 29th.

Her next project will be a kickstarter.com campaign for a web series about a sensitive zombie looking for love in Toronto called Undead Redhead. Jen will be the head writer and her production company, Wildcard Pictures, will produce. Watch for it filming in Toronto over the summer!

THE LAST RITE by Jen Frankel

Maggie Stuart is flying again, far above the street lights and night traffic. Below, Toronto is laid out like a Mondrian painting, all blocks and straight lines.

She banks and glides, savoring the bite of the cool spring air, and flies west, deep into the suburbs, toward home. She swoops lower, letting her fingertips brush the young leaves of the apple trees, their white blossoms luminous in the semi-dark, dodging the branches with a giddy joy at her own freedom.

Over to her left, Maggie glimpses the tarred roof and yellow bricks of her own school, Westbrook Elementary, and banks toward it through the canopy of trees.

Then suddenly, with a strange transition of the sort that can only seem logical in dreams, she is walking through the subdivision, her footsteps hollow on the asphalt. Although she is still in her night clothes, it is day now and she knows she is going home after school. It is so quiet her ears buzz; it seems like she must be the only person in the whole world.

She feels more than hears something behind her, approaching, slowing down, a dark, lumbering presence. Without turning, Maggie knows it is a black car. A heavy sense of dread descends on her, making the air go almost solid around her. Helpless to continue, she stops and waits for it. . .

And everything goes dark, like a flame winking out. From the blackness comes a deep voice – I have to talk to you, it says. Then her own voice in reply, heavy with foreknowledge: catch me, I’m going to faint. . .

Even as she struggles to put a name, a face, to the familiar voice of the other, everything is silent again. She stands now in the hall of Westbrook Elementary, while people flow by her like ghosts, their mouths opening and closing silently. Information barrages her, but it comes in fragments and none of it makes sense. Third period is. . . ? cancelled. It’s cancelled. There’s going to be an auditorium instead. She hears her own voice again, disembodied: catch me, I’m going to faint. . .

But she doesn’t, doesn’t truly feel faint at all, feels weightless in fact. Instead of fainting, she flies straight up, through the tarred roof of the school. It vanishes around her, insubstantial, and she’s soon high above it. In the distance, she can make out the roof of her own house.

She can’t see her house any more. Instead, she rises like a hot air balloon. Twilight charges the horizon with fire, then darkness descends and the world below spreads out, a vast landscape of black dotted with firefly light.

Straining to make sense of her position, she thinks she can make out something in the northern sky, somewhere far off where the lights of the city give way to farmland. . .

Then a series of images swirl between herself and the safety of the earth, becoming more disjointed as they flash around her.

. . .A candle flame, jumping and flickering; by its light she makes out a huge room, a cathedral, a cave, a design painted on the floor. . . But she can’t make it out, and shapes blossom around her. There are other people flying now, wearing horrible red masks, silent, coming at her first from below then from all sides. The mouths of the masks gape, and teeth glisten within the hollow openings.

Maggie looks down, desperately seeking an escape, and sees, far, far below, the roof of her own house. She raises her arms above her head, and her nightgown billows up around her face – and she plummets down to earth like a elevator whose cables have snapped.