With the holiday season approaching once again, many of us think of board games as a splendid choice to purchase for youngsters.

What could be more enjoyable than competing against friends in a little diverting, relaxing mock battle in, for example, checkers or mancala? Or what could be more delightful, friendly, and innocent than board game day at camp, with chess and perhaps backgammon on the agenda?

But the best of board games are far from innocent and friendly when played by experts and rated masters, some young enough to receive Christmas presents and attend summer camp: they are capable of being high-level intellectual struggles to the metaphorical death, and play is as grim and uncompromising as bloody battle on a genuine field of war. 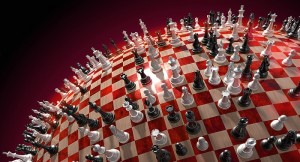 In the 20th century, H.J.R. Murray, a renowned British researcher and historian, and son of the man who largely oversaw the compilation of the first edition of the Oxford English Dictionary, published definitive works on the history of board games, and cites numerous examples of board games complex and intricate enough to require a virtual lifetime of study and praxis in order merely to attempt to master them entirely.

Serious practitioners of the Western form of chess and the Eastern (primarily Japanese) game of go would not disagree. In truth, games like chess, go, draughts (called checkers in America), various forms of mancala, and even backgammon are so fraught with science and subtlety that the outsider’s mind would boggle at the vast field of literature that has developed supporting claims that each of those pastimes is truly a deadly serious and agonizingly frustrating exercise in the constant quest for better and more exact play.

Periodicals and books abound on each of the board games mentioned above, and literally thousands of famous contests are offered for analysis and study; thoroughgoing strategic concepts are presented and explored; and case after case is proffered of seemingly reasonable and logical moves which are actually losing blunders if met with the most precise and effective of replies.

Murray’s compendium of board games, incidentally, includes a fascinating division into types of serious board games seen worldwide. All apparently can be can be classified into four distinct groups: war/battle games (like chess and draughts); race games (for instance, Chinese checkers and backgammon); territory games (for example, go); and mancala games (in which, as in all forms of mancala, the competitor who ultimately captures the most pieces wins).

Finally, we see nothing amiss in purchasing an innocent little board game for a kid—but we also note that when played by novices, it will indeed be just a game. However, when played by those taking it progressively more and more seriously, it will be part science, part artistic endeavor, part genuine competitive sport, and so little a “game” that it hardly deserves that sometimes-derogatory appellation.