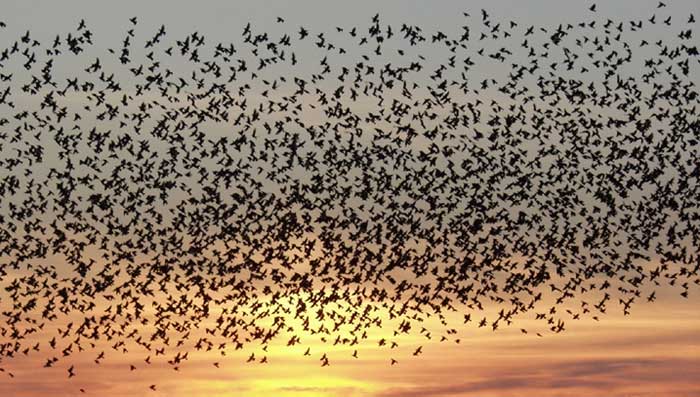 Birds of Dundas Square: I didn’t have to go far to find a story to tell. At the corner where the Empress Hotel once burned to the ground, I saw a crowd gather.

Everyone had a blackberry, or electrical, handheld device, all aimed at the strange, natural phenomenon that had manifested before their very eyes.

A large number of birds all flew in formation, almost trying to navigate the flashy billboards and the lights fastened upon the buildings.  It was quite a spectacle, resembling an impromptu airshow except this came from Mother Nature’s design. There was no symphony or orchestra leader to add to this scene. No choreographer to improve the performance. There was not even a technician to adjust the lighting.  “They’ve been doing this for several weeks,” someone told another; as they viewed the scene unfold.

Just like that, it ended after ten minutes. I continued to walk across the street. More spectators were in the square, all fixed in their positions, staring up.   “It always happens every day,” said one man, who was dressed in business attire, wearing spectacles.  He was sober-faced and serious with the promise of intellectual conversation to come.

The stranger seemed to be genuinely thrown off by the unexpected in the city central. “For the last few weeks this happens and seems to end exactly at 5 pm,” he added with a touch of irony. “Weirdly ending exactly at 5 pm.”

“Every day?” I asked at the man, blinking dumbly.

“Yes,” he replied, still staring at the billboards above, where the birds disappeared into the edifice.

So if you have time to spare at Dundas Square, come and see the creatures of the sky gather to play, only for the astute observers. Oh, come one and all, and see the birds of Dundas Square.