Beyond Infinity: Behind the Brick Wall

Scientists say our brains are sort of like super-sophisticated computers and that everything we have experienced since birth, and maybe even before that, is stored away in our hard-drives.

People under hypnosis have described in detail events from early childhood; parents and other adults present when the events occurred later confirmed the accuracy of the reports. Some folks claim to remember sounds and sensations they experienced in the womb. A few say they recall episodes from previous lives.

That anyone can recall something from several lifetimes ago is a fascinating concept to those of us who do well to remember what color shirt we wore yesterday. But even in the feeblest minds most things stick, though they may for a long time lie dormant in a dark corner of a locked file, waiting patiently to be brought into the light. An old pal reminisces about a long forgotten incident and we exclaim, “Oh, yes! I remember that!” Certain scents can bring back with startling clarity things we haven’t thought of in ages.

Memories can flash across the monitors of our minds at any time. One of my favorite pop-ups is a scene from my sixth grade science class. 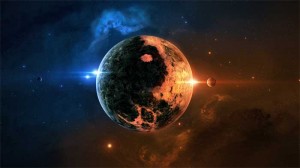 Mr. Stevens, our teacher, was attempting to explain to the class the concept of infinity. He said space, like time, goes on and on, forever and ever.

Larry, the smartest kid in class, sat in the desk beside me. The way he was squinting and shaking his head I figured he was having as much difficulty grasping the concept as I was. His hand shot up in the air.

“Sir, space has just got to end somewhere.”

Mr. Stevens smiled as he pulled a handkerchief from his pocket and began to clean his glasses. “No, Larry, it doesn’t. It just keeps on going, forever.”

“Well, it just can’t, that’s all. Nothing can go on forever. Everything has got to end sometime somewhere.”

These were the days when common sense still thrived and prayer was legal in school and God and the Bible had not yet been made taboo. Mr. Stevens asked, “What about God, Larry?  The Bible tells us God is eternal; that He has always been and always will be.”

Larry was silent for a few moments. The rest of us kids wondered if finally he had been stumped. We should have known better. “Well,” he said, “that’s God. God made space. And we’re talking about space, not God. Space has got to end somewhere.”

The debate went on. After a while, a hint of frustration creeping into his voice, Mr. Stevens said with a shrug, “Okay, Larry, let’s have it your way. Let’s say a rocket ship can go a hundred thousand million billion trillion times faster than the speed of light.  And let’s imagine this rocket travels at that speed for a hundred thousand million billion trillion zillion years . . . And then, there at the end of space, stands a big red brick wall! Now tell me, Larry, what is on the other side of that wall?”

Larry put his elbow on his desk and rested his chin on the back of his fist. His eyes narrowed and his brow wrinkled with intense concentration. The room was so quiet I could hear my heart thumping against my breastbone.

“Well, Larry,” Mr. Stevens prodded. “What is behind that wall?”

Larry sat up straight, stuck his chin out, and sucked in a long breath. When he spoke, his voice quivered with awe and wonder.

Your Art Reveals You!