It is no secret that some houses are haunted. Ghost stories are not unheard of.  For example, many years ago, a woman heartbroken over her husband’s unfaithfulness committed suicide.

She had been so unhappy that she continued to appear at strange times and one day, a workman, painting the outside of her house, saw her sitting on an overhead rafter. Fearful that she might fall and hurt herself, he told her to get down but she just laughed, and then cried hysterically.  The workman didn’t know what to do so he just left her alone. He wasn’t sure she even understood what he had said.  Later on, he described the woman to the owner of the house who said that what he had just seen was impossible. The owner’s face paled and his hands shook because from what the workman said, it had to be his deceased wife right down to the red apron she always wore. 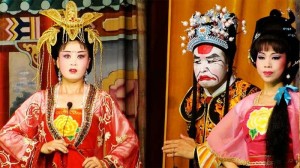 Another Chinese family purchased a house in an affulent are and when they moved in, the unpacked their suitcases and put everything away in the closet.  They awoke the next morning and were baffled to find their suitcases all packed, with their shoes, ready for them by the front door. At first, they thought it was a trick or relatives playing a game but when this continued on for days and relatives were unaware of this mysterious event, they complained to their realtor.   After much investigation, they learned that someone did die in that house. Afraid of the angry dead spirit, the residents wasted no time and quickly moved out.  To this day, the house still remains vacant.

This strange behavior among the Chinese may seem ridiculous to those who don’t understand their culture but traditional rituals should be treated with respect.  The origins are impossible to track down.

Chinese Buddhism presumes the existence of various Hells, almost like the Christian purgatory through which the soul must work off it’s karmic debts. Taosim mystic psychics offer a wide belief about afterlife.  Others are of the opinion that the afterlife resembles life on earth where material goods are transferred to the underworld on behalf of the dead.  Scholars frequently call upon the clear-cut philosophical guidance of Confucius in their public affirmation of values.

To the Chinese, it is a religion in the form to which they have practiced for centuries. Although the Chinese want as little as possible to do with the Supernatural world, they do live with all due respect to the invading presence of the world unseen.

Excerpt: Live from the Road

What You Think is Not What I Am