She stood in front of the mirror and gave herself a hard look. She searched the old face not particularly shocked with the amount of gray that had increased from the last time she actually looked at herself this way. She noted the crease between her mouth and her chin. The skin was beginning to give way.

It had been some six months now and she was expecting to see a difference. Maybe it should be my teeth she thought and she bared them for close inspection. No signs of fangs yet. It still looked old, decaying and yes one tooth less from years ago when he had punched her in the face.

How was she to look now? Tears formed like dark pools in the tired eyes and the silence around her was deafening. She went through the routine again, a routine that had become some kind of ritual. Her phone was one of the routine. She did a ritual with it every morning after her body inspection, since the day she died within. The day when she watched in horror, aghast as her heart was stabbed and love bled out of her.

In the deafening silence, she felt the blows again and again. The horrible pronouncement as she descended deep into an abyss and darkness enveloped her, when her daughter screamed the terrible words.

“You frigging bloody witch”. In her tribe and tradition it was the heaviest indictment a woman could receive. 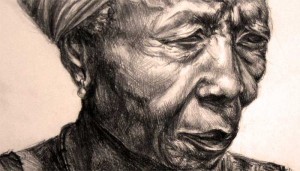 The knife twisted again and the world stopped breathing. From a distance as the blood flowed, she did not feel the blows again even as she heard the words pounding away at her heart and tearing it into shreds.

The pronouncement had been made in the open, in full hearing of anyone passing (they were two women who stood and stared), then oh yes there was her neighbor who lived in the next flat, (they hardly ever talked) who also stood and stared.

Disgrace and pronouncement complete and.. oh she remembered just in time it was her housekeeper’s day so the housekeeper had tried to pull them apart or more correctly pull her away from the  beating.

Six months later still in the dark tomb of unending misery and bleeding heart, she stood and stared at the mirror each morning. She had formed the habit of having three baths every morning, one in the afternoon and two at night. She slept alone, wrapped like a cocoon by the warm misery and the tears. She inspected her teeth every morning as she wanted to be the first to notice the fangs. She remembered that witches were expected to have birds in their stomach so she ate sparingly hoping to starve whatever bird was in her stomach and kept away from anyone in case they heard her rumbling stomach.

She also stared at her phone. It had not rang in six months. She always bought phone credits and played the expected reunion back in her mind. How long the conversation was going to be. Love restored and she would be accepted as a mother again.

She remembered also the silent walks she made at night so no one will see her. Nobody should see her silent vigil along the road to her daughter’s house, as she watched the lights, heard the laughter of her grandchildren. She particularly missed her granddaughter. Her cheerful smile, warmth as she nestled close showing the stories she had written at school. Her heart started bleeding again and she sighed. Worse was to come as she moved away from the mirror remembering the dark night when she had reached her guard post and saw the place completely dark. No lights, no voices and the windows were bare as the wind screamed a mockery “You bloody frigging witch”.

She was bathed in icy cold terror throughout the night.

A neighbor told her that the occupants had moved during the day. She staggered home, tired, exhausted, too tired to even inspect the pain. She spent the whole day staring at the phone willing it to ring and she prayed for release from the pain.

She prayed for release to walk away from a daughter she had brought alone into the world, had watched over, slaved to send to school and who one day six months ago had beaten her and called her a witch. In a small whisper from dried up throat she had kept asking why. “Because I asked when you will return money you took from my small business that had kept us alive from hunger?”

She had waited all these months for the terrible words to be retracted, an explanation that the beating and denouncement had been a momentary madness? had dreaded the visit of the elders if they should ask her to visit the palace and lived terrified by the glances of friends and neighbours alike.

She was too terrified by the pronouncement to even ask why, for in all her nightmares she had only been guilty of love.

Then the phone rang endlessly for a long time. We opened the door.