Australia is often referred to as ‘The Lucky Country’ and why wouldn’t we be? Just think of names like Hugh, Liam, Chris or Keith and you have a fine example of what the country has to offer – And we also have Vegemite and Tim-Tams.

We are famous for our sun soaked beaches, like Bondi Beach. Expertly patrolled and made safer by our bronzed Aussie surf lifesavers, dressed in their itsy- bitsy, tiny-weeny, swimwear, that leaves very little to the imagination and almost encourages you to be rescued. If you’ve never had the pleasure of watching a surf lifesaver boat race, let me tell you right now it’s a very cheeky affair. 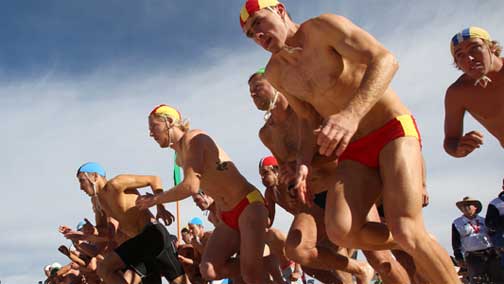 Australian men, or Aussie blokes as they like to be known, have a passion for playing sport. As a red blooded Aussie woman I have a passion for watching. My preference is rugby league. It may have something to do with muscly, toned bodies running around in skin tight, team jerseys and equally tight shorts. Or maybe it’s the ball skills they showcase? I’ll let you decide!

The only complaint I have about the average Aussie male, and it is a small one, is his inability to refer to his mates by the name on their birth certificate. Aussie blokes need to give everyone a nickname. Sometimes it can be as simple as adding a letter ‘o ‘or ‘y ‘to a surname – like Jonesy or Thommo. Other times the origins of the nickname can be quite extensive. My all-time favourite was a rugby league player named Phil Sigsworth. Phil ended up with the nickname Whatsa – I have to point out it did start out as Whatsapacketa, before it was shortened to the more usable version. Think about it…what’s a packet of sigsworth!

So, it was no surprise to me as I was writing my erotic romance League of Love series, set in Australia and full of tempting male rugby league players and the women they fall in love with, that my characters would follow down this path. Women, as a general rule don’t partake in this peculiar Aussie male ritual – so I had names flying everywhere. The male characters using one name, the females using another. It also created a conflict with my characters from book two. My hero decided to call his heroine Mags shortened from her surname Magenta. Unfortunately for him, in Australia the word ‘mags’ is used to describe the type of wheels on a car – I never once mentioned that our men are overly bright! Sorry guys.

Writing romance books about the Aussie male was not difficult, as a general rule they are a delightful species and easy to love. With big hearts, a great sense of humour and a loyalty that became legend during war time. We Aussie woman have a lot to be thankful for, and not just for the half-naked men on the beaches, we also have a wide selection of men to choose from. You name it and we have it. Professors’, bankers, movie stars, musicians, and tradesmen, we even have our own cowboys called jackeroos. All filled with that great Aussie spirit.

This truly is ‘The Lucky Country.’