As a painter, and therefore an alchemist, he re-arranged people, souls, and things, in the spirit of Zosimos of Panopolis

. Sometimes taking them to pieces bit by bit, and with magical twists of colour and light, they were re-invented or re-worked. The artist lived in a thatched cottage, that smoked … at the edge of the sea, where he fished for … inspiration … in the waters of Allihies. 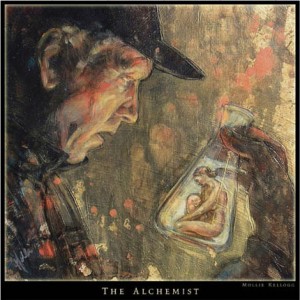 On that morning after the festival, the artist was distracted from his investigation of a dying crab, by the waking cries of nearby seagulls. Standing up and shielding his eyes to follow their whereabouts, he became aware of a woman, walking ahead of him, along the edge of the sea. She was barefoot, and as she held her skirt between her knees, he swore he could hear her talking.

His stride was longer than hers and was soon by her side and into her rhythm. He sensed her embarrassment and then her caution, as he wished her good morning. She had come for the fair … to sell jewellery, and had decided to stay on, for the morning, for the thrill of walking on a deserted, early morning beach. He caught the irony in her voice and smiled. She returned his smile. They walked; heads nodding in conversation; hands gesticulated as he told her of Cluin, Cod’s Head and the history of Copper mining of that area. 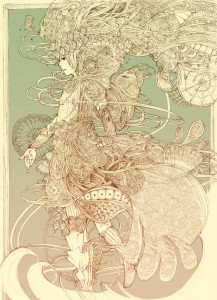 Two hours later, they were sitting on a bench outside his cottage looking at the line where the sea meets the sky, drinking coffee that he had made on a tired stove.

She followed behind him eagerly, as he showed her his paintings, his books, his vegetable garden. She swam in his blues, his greens, his yellows … the colours of his alchemic laboratory. As the evening shadows crept in, he cooked for her, read poetry for her, and after red wine was sipped by the hearth, they danced. She danced for him. As he walked her to her car, he asked for her permission to paint her. They embraced each other warmly and knowingly in the darkness.

The woman returned several times, over several years. Each time he had another painting, another version of her to exhibit. By this time, she shared the cooking, but never the poetry.

It was the music of his words, she wanted to remember in the silence that sprawled between visits, in spite of an understanding that their friendship would never go beyond an intellectual coupling of mind and spirit. One candle-lit evening after a stroll along the beach, he announced that he was leaving Allihies for France, because he needed to experiment with different colours, different light, different climate. He asked her to go with him as he walked her to her car that night in the darkness. They never saw each other again. 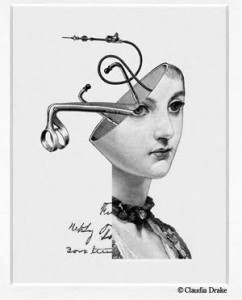 She heard of the artist’s death, ravaged by searching and alcoholism, eighteen years later. (There is a scientific theory that if Alchemy is stopped in the process of deconstructing, the object will be destroyed.)When the woman returned to walk along that beach on a deserted early morning, she talked to the sea once more.

The Alchemist of Allihies, had not only separated her and joined her in his paintings, he deconstructed her mind and her spirit. He had given her a panacea … an elixir of life … a love of life! She smiled with a hint of irony, as she spotted a man and his son digging for worms … to fish for … inspiration … in the waters of Allihies.