Numerous love affairs, aristocratic excesses, and debts are words often associated with Lord Byron (1788-1824), one of England’s greatest poets. A “madman, bad and dangerous to know,” according to one of his mistresses. 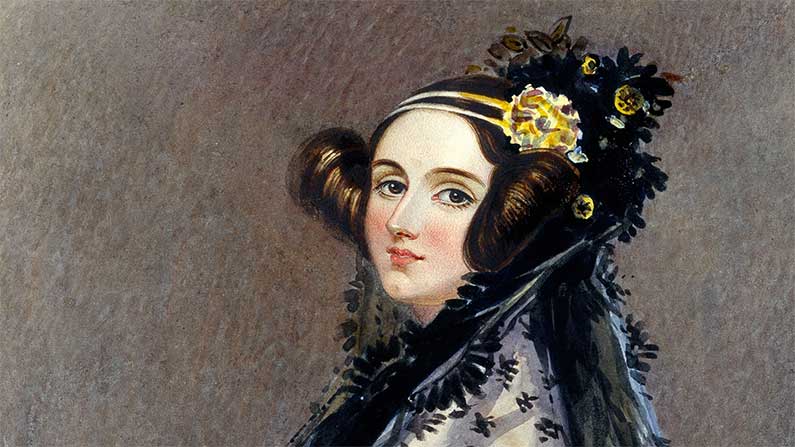 That the strictly religious mathematician Anne Isabella Byron crossed his path is one thing, but that the two were plagued by a persistent interest in each other is the last thing you’d expect.

The marriage did not last long but resulted in the birth of a daughter, Augusta Ada King, Countess of Lovelace (1815 – 1852), born Augusta Ada Byron and now commonly known as Ada Lovelace.

Terrified that Ada would develop the same madness as her father, or might even become a poet, Anne Isabella introduced her daughter at an early age to mathematics and scientific research.

That Lovelace would start using mathematical models for gambling, losing thousands of pounds, is, of course, ironic, but it is also just a footnote in a life that was further dedicated to, what she liked to call, poetic science.

For that he needed Lovelace. She brought functionality to the first computer and ensured that there was an actual output. Only virtually, of course, as Babbage’s machines were never actually built in the nineteenth century.

When Lovelace translated an article on the operation of the so-called ‘analytical engine’ by Babbage, she added a number of footnotes that transcended the length of the original article, containing a method that a working version of the computer would have yielded mathematical series, also called an algorithm.

Lovelace not only invented how to program a computer but could take a step back to wonder what does this mean for humanity? She saw that a computer is essentially a machine that runs by itself.

Can such a theoretical exercise actually be called a computer program? Even in the sixties and seventies, many computer programs were at first conceived entirely on paper. You did not want to bother a computer with your errors and typos. Lovelace soon saw that a computer did not work with numbers, but symbols.

It is hard to imagine how immense the conceptual stage at the time must have been, but the implications are no less. She wrote that you could capture relationships between the principles of harmony and composition in mathematical notation: a computer should be able to make use of any length and complexity of compositions. That is visionary.

No wonder people love to adopt a role model like Lovelace, who observed science from an original perspective. “Let me point out,” she wrote once, “the miraculous transformations that many formulas may undergo the unexpected, and for a beginner, the seemingly impossible identity of forms that at first glance seem totally wrong, in my eyes one of the main obstacles for the first part of a mathematical study.

I often think of certain spirits and fairies you read about, who now have one form, and the next moment a totally different one.”