Isn’t this an oxymoron? Maybe, but look at this essay as a silly movie review. The purpose is to have fun with the characters and the plot.

To adopt a John Cleese tone; of course the movie is funny! Not funny! OK, there I borrowed from the Fawlty Towers episode with the Germans. 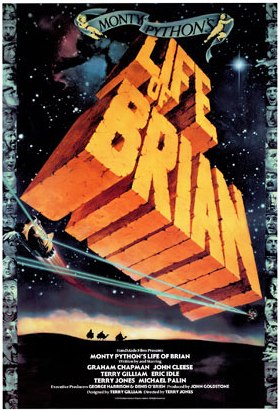 It starts with the real Christ preaching. Nothing very Christ-like in the standing room only in the back. This is where we find the snotty rich couple. I named them the Ben David’s. There is the tough guy who keeps being called “Big Nose,” who finally pops his tormentor, well in the nose. Then you have, Brian. A nice Jewish lad, but with a first name Brian? Who’s your Daddy? Well, Mom admits Dad was a Roman soldier in the Jerusalem garrison. I didn’t think the Irish joined, but what do I know? Maybe it is the predecessor to the Irish cops in New York and Boston, helping to create a modern tradition.  Brian is a Mama’s Boy. Mom likes a good fight and Terry Jones makes a good crusty old hag.

Mom is bored with talk of peace and wants to go to stoning. Women disguised as men, all trying out to pitch for the Boston Red Sox. The only difference here, is the catcher isn’t wearing equipment and lacks a glove. You try getting hit with a ninety five mile an hour stone and see how YOU like it. The poor bugger doesn’t even get to take first base for getting hit. Ah writing this makes me dream. Pitchers and Catchers report to Spring Training in six weeks, but who’s counting and I am going off the rails here.

Sociologists talk about this modern phenomenon all the time; no father at home. Brian has no male authority figure and he needs some way to prove his worth. So he wants to strike a blow for Israel.

Mom uses her connections to get him a job in the heart of Roman culture, the arena and the games. Then he found his destiny, the Peoples Front of Judea. There they were, complaining about his selling Roman wares.

They gave him an assignment, writing “Roman Go Home.” The thickheaded centurion was more worried about getting the grammar right.  Then there was the attempt to kidnap Pilate’s wife. This is par for the course. There is the old joke, about three Jews stranded on an island. Two form separate congregations and the third wants nothing to do with either. Two groups showing up at the same time and fighting each other, not the Romans? Par for the course.

Brian manages to escape from Roman custody, and that’s when the space ship showed up. You didn’t know Jews invented space travel, did you? This is interesting, considering that Greeks and Romans saw Jews as not too bright.

The space ship drops him off among other preachers, and so another “Messiah” is anointed.

You know what happens at the end with the crucifixions. Let me take the snotty couple, I named the Ben David’s and play with history a little. The temple revolt didn’t happen for another thirty seven years, but they are deported to Rome.

Mrs. Ben David is outraged. She’s constantly needling her husband on the trip to Rome, saying, “We had a nice life, but oh no, you had to bankroll low class rebels. Now look at us!” They are paraded through the streets of Rome, next to the hulking Jewish men; Romans like to have as slaves. “Simon, we marched with pride in parades, back home. Instead, we are being marched with men we looked down on and equated with them. This is all your doing and you owe me!”

They are able to buy their way out of slavery, but are forbidden to return to Israel, now called Palestine. It’s like the line Denzel Washington uses in the movie Malcolm X. “We didn’t land on Plymouth Rock, Plymouth Rock landed on us!”

Simon gets involved in trade, and has to trade with barbarians, who will scare you into baldness.

Through the centuries, Ben David descendants are told how their ancestor got them into this Diaspora mess. From Lucca, in Italy, to Mainz, in Germany to Krakow in Poland, they wandered among the strangers. One made a pilgrimage to the Holy Land under the Ottomans, but returned to Krakow saying the Ottoman Empire has ruined the Holy Land, it is a swamp, and we are better treated in Poland. We have to live amongst strangers; we might as well live here.

Then, Europe got bad, and it was off to America.  The closing of the Passover Seder, “Next Year in Jerusalem,” is getting farther and farther away. That’s another story, though.