‘Mr Franklin the country is falling apart. We have no money, New Orleans is closed to trade and pirates attack our ships with impunity, Government is totally paralyzed no one can raise money or pay off our loans to foreign countries’.

‘Yes Mr Madison, the states seem intent on destroying our dream of a great nation with their petty self-interest. What we need is a strong central Government and Legislature who can raise money and put the interests of the whole country before their own’. 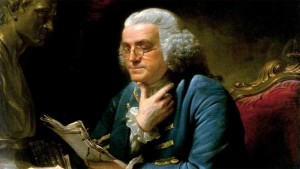 ‘But Mr Franklin, I do not believe that the States will give up their Primacy for the betterment of America. They are run by people of small minds and small dreams, content with power for themselves’.

‘James, America could be a great country, with a fine Army and Navy to protect our commercial interests, but it costs money’.

‘Perhaps Mr Franklin, we could call together all the parties who wish to make our country great and convene a Constitutional Convention to draft a New Constitution’?

‘That seems a really good idea, If we could build a strong Congress that would pass laws to make this country expand and grow, take in all the suffering humanity of the World, and get rid of slavery’.

‘I believe that would be difficult. So many people here are dependant on slavery for their wealth, plus some of the states would just break away. It’s possible that we could delay that decision for twenty years, it would allow states to adjust gradually’.

‘A very good idea. I am sure that with all the checks and balances in place we will never again be in this situation of financial disaster and our country will be economically strong. I am certain that the Congress of the New United States will never fail in its duty to raise sufficient taxes and not spend more than it raises’.

‘We must look forward to a safe and prosperous future’.

Lost Pages from a Journal