I have been looking at the economic problems from a slightly different angle. Everyone blames the southern countries for all the malaise that exists, as they depend on tourism for a large proportion of their GDP, plus agriculture, and do not pay high enough taxes to cover expenditure.

Where as the northern countries work hard and pay taxes. Is it that simple? I have been guilty of playing the stereotype card in the past.

Greece has been offered ten years of austerity. Low wages, high prices, increased tax burden and at the end they will be deeper in debt than they are today. Something wrong there! Is this the best that politicians and Central Banks can do to help Greece get out of a mess that is not totally of their making? 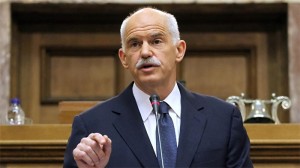 What does Greece not have? (and this applies to many Mediterranean countries). A large and flourishing industrial and manufacturing base.  If you wished to purchase a car it would have to be imported, aircraft, toothpaste, alcoholic beverages, even pizza’s, dairy produce, the list is endless. If Greece was not in an economic block that is a free and open market, they could solve the problem by introducing import duties on all manufactured and industrial goods, the same applies to Portugal, Ireland, and Spain.

They have only one export, MONEY!

This is a problem as much for Germany. Because if all countries solved their woes by increasing the size of a very small manufacturing base they would not then purchase as much from Germany.  This also applies to France. Here’s a question: If most Mediterranean countries are so dependant on agriculture, why is it that France gets the largest share from The Common Agricultural Fund.  Time to spread the jam, or mamalada around.

The problem therefore is as much Germany’s.  They have a large budget surplus, everyone wants a Mercedes, BMW, AUDI, Rolls Royce, Porsche, Bentley, VW, Skoda, SEAT, Mini, These are all German Cars,  and the profit goes to Germany.  If Greece stopped importing goods it would solve their problems, but cause another for others. It is time for Europe to get together and solve these inequalities.  Either spread the manufacturing around or allow countries to introduce import duties.

Ten years of poverty is not the answer!