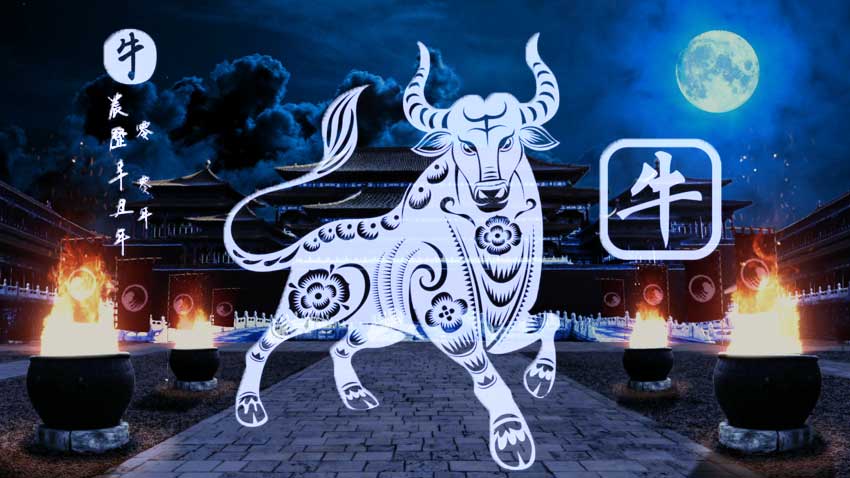 Welcome to the Year of the Ox and “Gung Hay Fat Choy!”

This phrase used during Chinese New Year is nothing new, but do you know what it really means?
It says, “May you have a happy and prosperous New Year.” Though it rarely happens to many of us, there is so much more to the celebration than just the greeting.

The Year of the Ox begins its reign on February 12, 2021, just after the stroke of midnight, and will assume lunar supremacy, ousting the Rat, and continues to reign until January 30, 2022. At this time, the Tiger takes over. The Ox, the collective noun is genus Bovinus – cow, steer, or bison will dominate the heavens and direct man’s fate for the upcoming year. This represents the beginning of a new era or, in Chinese terminology, “the opening of the sky.”

In Cantonese, the “Ngow” is the second in the twelve-animal yearly sequence (rat, ox, tiger, rabbit, dragon, serpent, horse, ram, monkey, rooster, dog, and boar). The Chinese identify their years following a complicated system of chronology dating from 2637 B.C.

In old China, legend has it that the Ox once resided in Heaven as a Star Diety. The Great Buddha was dismayed by man’s pitiful struggle against starvation. Hence, he dispatched the Ox to tell his subjects that they would receive sustenance every third day if they worked unstintingly. But the Ox became confused and informed them their diligence would be rewarded with three meals a day. Exasperated, the Almighty stripped the Ox of his Divinity and sent him back to Earth to help man produce the necessary food. So the Ox, once found only in heaven, became Earthbound.

The Ox comes across in folklore as good-natured and guileless, if not downright dumb, because the Rat easily outwitted him to become No. 1 in the lunar lineup. Still, these traits are absent in the horoscopic character analysis of Ox people.

The ox-types, while quick-witted and politically adroit, are quixotic. Some zodiacal sources characterize them as eccentric, even schizoid. Beware when this breed sees red, for he is apt to charge headlong. Failure is intolerable to these obstinate mavericks. Yet, being touchy and undemonstrative, they seldom cut a smooth path through the fields of romance. Domestic problems beset the Ox, but they plow on to greener plateaus in later life.

Chinese (Lunar) New Year is by far the most important of all Chinese celebrations. It is the equivalent of birthdays, Christmas and Thanksgiving, all rolled up into one, so the Chinese spend lavishly on food and drink, particularly during the first two weeks, and provide their families with ample supplies of chicken, duck, meat, fruit, and vegetables.

In many large major cities, this celebration always includes a parade featuring the traditional and colorful dragon dance. Another will be to eat delicious, traditional dishes prepared just for this special occasion, which explains the old Chinese proverb that no one goes hungry during the first part of the New Year. Since food plays an important role in all Chinese functions, all meals are prepared in advance because cooking that special day is taboo.

Three days preceding the appointed date, all chores are to be completed, houses are cleaned, new clothes are bought for everyone in the household, and debts are paid because everyone wants to start the New Year with a clean slate.

Years ago, this holiday was celebrated for a full month, but today the festivities last about two weeks. Some Asian businesses close for three days. The family reunion dinner served during the eve of New Year’s day must involve a large spread. Fresh fish is a “must” as fish (yu) has the same sound as the word for abundance and implies the family will not want for the coming year.

On the first day of the New Year celebration on February 12, 2021, everyone dresses up. Relatives and friends bring food gifts since anything edible is inextricably tied to the concept of prosperity, signifying that there will always be plenty to eat in the coming year.

Another Chinese custom is monetary gifts in tiny red envelopes ranging from $5.00 to whatever you want to give. Usually, the older people give “Lai See,” the red pocket money envelopes, to younger children and unmarried individuals. Others visit the Buddhist temple to bring good luck to family members. Firecrackers and incense are burned to chase away evil spirits. Red banners are hung on the front doors to encourage good luck.

Chinese people are superstitious, and they certainly don’t want anything to do with bad luck, so you should never use a broom because you could sweep away good luck, and don’t use a knife because of fear of cutting away all your good fortune. Parents, grandparents, and friends will also be honored with edible gifts such as oranges, candy, nuts, or pastries. This period promotes benevolence, reunions, family unity, remembrance, and people will pay homage to their deceased ancestors. Many momentous events took place during the Ox years.

On a Positive Note

On January 5, 1925, Mrs. Nellie Tayloe Ross in Wyoming was elected the first Female Governor in America. That same year on May, 4th, 1925, Calvin Coolidge was sworn in as U.S. President. And it was on May 12, 1937, that King George and Queen Elizabeth were crowned at Westminster Abbey in London.

became our U. S. President. On May 8th, 1961, Sophia Loren gave her best performance in the movie, “Two Women,” after her sixty-year movie career. On October 5th, 1961, Audrey Hepburn’s movie, “Breakfast at Tiffany

On the Negative Side

Dr. Sun Yat Sen died on March 12th, 1925, and General Chiang Kai-Shek is New Kuomintang Chief. In July 7th, 1937, Japan invades China, take Peking and captures Nanking, and commit many atrocities. In January 1949, Mao Tse-Tung took over China and formed the Communist People’s Republic of China. During this time, Chiang Kai-Shek resigns as Nationalist President. In September 1973, the bombing of North Vietnam was halted by President Richard Nixon. They sign a peace treaty in Paris, and American troops leave Vietnam.

This year we will feel more responsible, and no success can be achieved without conscientious efforts. Trials and
tribulations will be mainly on the home front, so it’s the right time to settle domestic affairs and get things in order.
Conflicts this year from lack of communication and refusal to give in on small technicalities and newfangled notions
will be given an impassive stare by the phlegmatic Ox. Politics and diplomacy will just be treated with indifference.
Stick to routine and support conservative policies—no time for nonsense.

No Work No Pay

The Motto this year is, “No work, no pay!” Time waits for no one if we are too lazy to sow, then we can blame no one if we have nothing to reap. Many things will require our attention and the list of what needs to be done is endless. Yes, the Year of the Ox favors discipline. But hang on and be patient because everything will be sorted out, and we will be rewarded for our efforts so long as we remember and do things the conventional way. No tricky shortcuts. It is worthwhile to mention that although the stoical Ox is soft-spoken, he also carries a big stick, and this is his year!

Caryl McAdoo Jan 30, 2014 4
Story Composition The Three Acts of Life – and Your Stories Every story has three parts: the beginning, the…
Writing