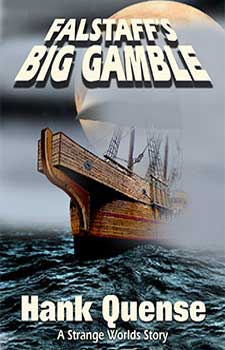 Hank Quense took a simple concept – lift some characters from Shakespeare, put them in a box and shake vigorously – and added his own unique touches. For example, Hamlet, who is actually the first character we meet, is a dwarf, and prince of the town of Denmarko. He does in fact meet a ghost, but it’s not his father – the recently-deceased is too busy in the afterlife to show up, so he sends another ghost. Oh, and Hamlet? He wants to be a beekeeper, so his famous soliloquy is “to bee or not to bee!” (No, I did not misspell ‘bee’!)

In similar fashion, Othello is a dark elf, married to the troll Desdemona, whose grandmother is the “Godmother” of the local crime syndicate! Othello has been padding his military resume, a problem now that he’s Minister of Homeland Security. Sir John Falstaff, a human, needs no padding, but he does need money. At first all three of these characters wander the stage separately, but when they do meet, it’s perhaps not exactly the way Shakespeare would have done it.

I am a tough audience when it comes to humor, but Falstaff’s Big Gamble was right up my alley. It’s not a laugh-out-loud book, but it is amusing and light-hearted. Quense gets the essence of each character correct, and runs that essence to its logical if farcical conclusion. Everybody gets what they deserve, if not what they want, and you the reader will have a lot of fun watching it happen.
— Christopher Gerrib

Sir John Falstaff and his page, Poulet, thundered through the city gates a few minutes ahead of the angry husband and his relatives, and seconds
before the gates were locked. A partial moon gave them enough light to pick out the woodland road they traveled.

A few miles from the city of Cintri in southern Gundarland, Falstaff called out, “Slow down, Poulet. My horse is tiring.”
“Next time, steal a horse, not a bag of bones.” Poulet, bundled up in a brown cloak, rode a fine pony.
“Now you’re a connoisseur of horse thievery? Is there no end to your learning?” Falstaff knew his hairy-toed half-pint page was right; the horse
was an old nag, but under the circumstances, it was the best he could find.
“How can you expect a horse like that to carry all your excess weight?”
Poulet called over his shoulder.
“Don’t start in on my weight. The women like me the way I am.” The fifty-year-old Falstaff wore an expensive dark blue doublet and matching hose. Both garments, a few years old and fitted to a much lighter man, threatened to burst at the seams with a wrong move. A scabbard with a jeweled hilt adorned his left hip.

“I’m gettin’ tired of hustlin’ outta town because some husband wants to kill you.”
“Wooing noble women is the fastest and surest way to get money. The sweet thing I entertained this evening gave me a purse of coins to help me
get away from her cretin husband. Besides, ’twas time to move on. I’m too well known now to get anyone to invest in a new scheme.”
“It’s good you gotta heavy purse, but we can’t spend the coins in the towns around here. You’ll get hung if we go near any of ’em.”
“‘Tis not my fault these small towns have silly rules about card sharping and wooing married women. Let’s rest until dawn.” Falstaff dismounted and
his horse whinnied in relief. “With first light, we’ll head north to Dun Hythe.
I haven’t been there in a number of years. Perhaps we’ll find new faces and new opportunities.”

He stretched his muscles, cramped from riding, and
slapped Poulet on the shoulder. “I have an itch in my palm and it bodes well for us.”

Award-winning author Hank Quense has over a dozen books, ﬁfty short stories, and a dozen articles on ﬁction writing. He has been published by a small indie publishing house, has self-published and now has his own publishing company, Strange Worlds Publishing.

He has lectured extensively on Story Design and Self-publishing. His Fiction Writing Guides provide the new and inexperienced ﬁction writer with a wealth of valuable advice and directions.
Based on his journey of discovery on how to write publishable ﬁction, he details a process that focuses the writer’s creativity on the important elements of story design.

Using advance graphical software, he has developed a unique way to manage the creative process and monitor progress.

Hank lives in Bergenﬁeld, NJ with his wife Pat. They have two daughters and ﬁve grandchildren. He writes humorous fantasy and sciﬁ stories.

On occasion, he also writes an article on ﬁction writing or book marketing, but says that writing nonﬁction is like work while writing ﬁction is fun.

A member of the Science Fiction Writers of America, he refuses to write serious genre ﬁction.