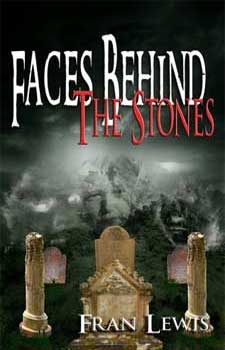 By Irma Fritz
Do you remember the ghost in Shakespeare’s Hamlet telling his story, asking his son to avenge his “murder most foul.” What Fran Lewis wrote in “Faces Behind the Stones” is as frightening as those ghostly scenes.

We can all be grateful that non-fiction writer, reviewer, blogger, and radio host Fran Lewis has taken a plunge into the world of horror fiction. Reading those seven stories about murder and suicide just about scared the daylights out of me. The characters are so real that I could very clearly hear their voices speaking to me from their graves. They were talking to me, just like the ghost in Shakespeare’s Hamlet talked to his son. This is what happened to me, those voices were saying. I need for someone to know the truth. Please, be my witness.

Besides the stories in this book, I also love the cover art! The gravestones are tall structures, and in the background is a face half-hidden in the mist. Is it a young girl? Is it a woman? It’s lovely. It’s sad. It’s dead! I can almost hear the dogs barking. Or is it wolves howling? Just looking at the book cover lets you know that you’re in for the fright of your life. Good job, Robert Hunyor; and well-chosen, Fran Lewis!

Besides the mysteries told in these stories, there is another—very real—mystery to this book. At least to me! The author dedicates her collection to the memory of her beloved sister, Marcia Wallach, who died unexpectedly and much too young. While Ms. Lewis tells us that this is a work of fiction, she also tells us that the events described in her stories are based on facts. Written with enough changes to protect the guilty, Ms. Lewis?

While reading these stories, I was trying to deduce where reality ends and fiction begins. Or as MJ Walsh says in the book’s Prologue: “Hear my voice. Listen to my story and you decide: natural causes or murder?” Is my imagination running wild or might MJ Walsh be Marcia Wallach?

Well, here I am, right back to my Shakespearean analogy. As Hamlet said, “The play’s the thing wherein I’ll catch the conscience of the King.” So now, as I think back to some of the stories in this collection, here is my question. Is there possibly a treacherous King Claudius in the author’s life, whose conscience she’s trying to catch with her fiction based on true events?

Shakespeare said:
“I have heard,
That guilty creatures sitting at a play
Have by the very cunning of the scene
Been struck so to the soul that presently
They have proclaimed their malefactions
For murder, though it have no tongue, will speak
With most miraculous organ.”

Fran Lewis does speak with most miraculous organ about murder. And if my hunch, and Shakespeare’s prediction about the guilty, is correct, there might very well be a sequel to “Faces Behind the Stones.”

FACES BEHIND THE STONES

Driving down the rocky path I saw the overgrown grass, weeds and poison ivy overtaking the outer perimeter of the bushes.

The smell of mildew, the stench of the dried bones of animals killed by cars along this dirt road coming up from the ground, the sadness on the faces of the drivers in the cars behind us; you could feel the pain and sorrow.

As you looked inside the cars and saw the faces of the drivers, you began to wonder what they were thinking, their thoughts and feelings as they travelled down life’s highway, possibly for the very last time.

Here are seven that will make chills run down your spine and make you wonder: What lies behind the stones? Who lives there?

CHAPTER ONE: MURDER THROUGH THE EYES OF A DEAD WOMAN

The Beginning: Before the end there is the beginning, the day before.

Brain traumatic injuries are not uncommon. Not wearing a seatbelt while riding in a car, biking without a helmet, falling headfirst down a staircase, or hitting your head very hard are just some ways to cause injuries to your brain.

MJ WALSH: HEAR HER VOICE FROM BEHIND THE FIRST STONE

Prologue:
I might as well be six feet under, and I certainly have nowhere to go; the air is musty and the accommodations crowded. No one can hear my silent screams or feel my pain. If you are reading this, you know it’s too late for me, and better hope it’s not too late for you as I tell you how it all began.

Hear my voice. Listen to my story and you decide: natural causes or murder?
So, I keeled over and I lost oxygen to my brain, which, of course, I needed in order to function, run my life, my family’s life and the doctor’s office which is now falling apart since my demise. However, they told them that after five minutes there was no hope for me and the brain cells that died could never come back. Anoxia brain injury occurred, which is life threatening and can cause cognitive problems, disabilities, or worse. In my case, it caused worse. Lack of O2 and no more brain power; what is the world going to do without me to help run so many lives?

Now I am lying here all alone in this horrible place filled with bedbugs, foul smells, odors and nurses that are mean, abusive and really don’t care about me. My husband did not want to take care of me once he realized that I would need to live on breathing and feeding tubes. He said he needed his own life and he would not deal with me anymore.

So, here I am in this God awful hell hole, lying in a bed in my own urine, hoping that someone comes to change me soon before I stink up the whole room and beyond. How I got to this point I am going to tell you in order for you to decide who is to blame for my so-called heart attack, and what really happened to me. Here is my tale. Murder through the eyes and mouth of a dead woman: My name is MJ and this is my story:

The morning of June 19th 2010:
Going to work, I had an uneasy feeling in the pit of my stomach. My husband Marvin and I just had our usual Monday morning discussion about finances, his self worth and my lack of it, and much more. His condescending attitude and moral indignities were his way of starting my week off on a real big, fat, sour bang up note. Only concerned about the almighty dollar and the fact that I might be spending some of mine, he gave his usual lecture about why I am so far behind in paying my charge cards, my other bills and more.

After listening to his tirade for over 20 minutes, I put on my coat and decided to exit before the heart palpitations that I was feeling increased. I knew that my pressure was rising and I was feeling lightheaded, but I would never tell this to the beast I was married to for too many years. Never outwardly complaining to anyone, I decided to leave while I could still drive, and go to work where the next level of stress and difficulties awaited me.

Pulling out of the lot of my complex, I began to feel more relaxed, and watching Marvin drive in the opposite direction helped lower my pressure. I shut off my cell phone so I would not have to listen to him if he decided to call and continue his diatribe of financial advice while I was driving. I turned the volume up on my car radio and entered the line of traffic on the Meadowbrook Parkway on my way to work.

I loved what I did, but lately there had been so many changes that I dreaded going into work to find out whose hours I had to cut, who would be laid off, or what other changes would befall me before I even took off my jacket and had my morning coffee. Entering the office, I saw one of the lawyers that I often worked with when dealing with some of the legal problems faced by every medical office. I had known Mark for a long time, and counted him as one of my good friends. Mark was really nice and often smiled and commented on how great I looked; all in innocence and fun, and definitely nothing inappropriate… 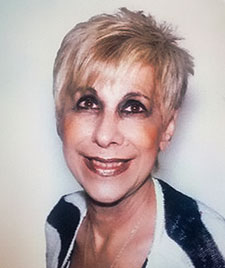 Fran Lewis worked in the NYC Public Schools as the Reading and
Writing Staff Developer for over 36 years.

Working with students that were not great readers and encouraging them to enjoy and embrace print was her greatest reward as an educator.

Born in the South Bronx, she grew up with people from many ethnic backgrounds.

She learned to play and work with children in her school that came from other countries and different places.

She has three masters degrees and a PD in Supervision and Administration.

In addition, she is the author of three children’s books and a fourth that has just been published  on Alzheimer’s disease in order to honor her mom and help create more awareness for a cure.

The title of her new Alzheimer’s book is Memories are Precious: Alzheimer’s Journey; Ruth’s story.

She was the musical director for shows in her school and ran the
school’s newspaper. Fran writes reviews for authors upon request and for several other sites.

You can read over 170 of her reviews and articles on Angie’s Diary.

She hosts two radio shows on Blog Talk Radio. Book Discussion with Fran Lewis is on Blog Talk every third Wednesday of the month from three to five eastern.

Her children’s author’s show is four times a year. She hosts online book blogs and book tours for authors and reviews books for authors throughout the world.

Fran has published six books, the last Because We Care in memory of her sister Marcia. The proceeds going to find the cause and cure for Alzheimer’s. She is also an Amazon reviewer.

Fran has reviewed over 400 books in the last year and a half. She does online interviews and reviews for bookpleasures, manic readers, booktown and authors all over the world.

You can find her reviews on reviewers roundup, fellow writers and many sites for authors on facebook.

Fran’s goal is to get her books published by a traditional publisher and on the shelves of every school library, hospital and bookstore.

Other books by Fran Lewis:

My Name Is Bertha

I speak the truth:
You need to Hear It!

Sharp As A Tack or Scrambled Eggs: Which Describes Your Brain?