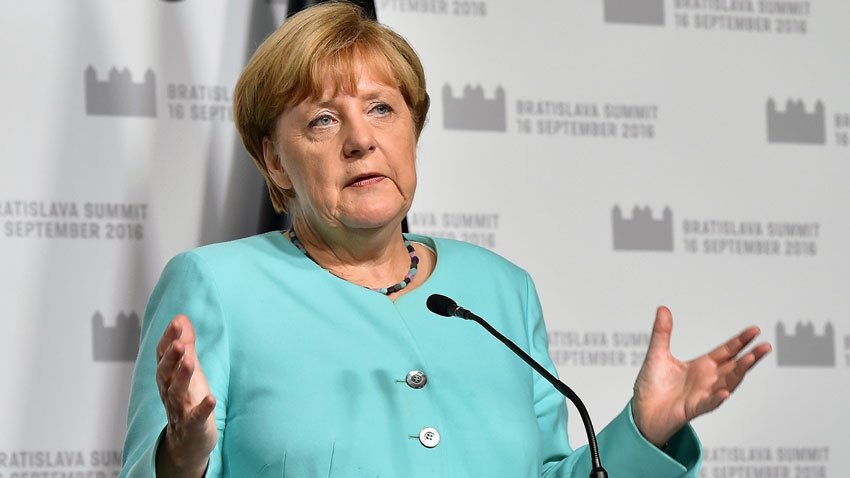 For years, I wondered why Germany only adds German subtitles to films and TV series, when German is one of the least common languages, either spoken or read.

To me, it appeared to be a self-destruct syndrome when they have excellent police series such as Helen Dorn and the long-running Tatort.

It was only when I was discussing the situation with my wife that “the penny dropped.” Germany is in such a devastating state (financially), the German press thinks they will never recover. To give you an idea of their debts to the EU, here is the last figure I read, and this was months ago. I don’t know what the exact number is. All I can tell you is that if you wrote it down, the number would be three followed by 15 zeros. I cannot even comprehend a number that large.

Usually, in a case like this, one party or the either would defend the Chancellor, the truth is many Germans despise Angela Merkel and her policies At the last election her party polled its lowest figures on record.

I have no doubts that Angela Merkel will take the fall for this disaster, and people will blame her “Open doors policy,” which allowed thousands of Muslims into the country. The truth of the matter is the troubles started as far back as the mid-1980s, if not before. When I was in Germany, the Chancellor permitted thousands of Abbysinians to enter, and within weeks southern Germany was raked with violent crimes, at the heart of the crimes were the immigrants.

When I read that Mrs.Merkel had opened the borders to Muslims, I said, “Oh no, not again; it will be a rerun of the ’80s.” Well, it wasn’t; it was far worse as they have spread across Europe.

Norway told Sweden if they didn’t close their borders, then the Norwegians would have no other action but to patrol them. The Finns took a firm stand, and if they see a Muslim break the law, they get expelled and their photo sent to all the border guards.

In the UK, we let them get away with anything. They love to play the race card to get away from prison. Somebody should explain being a Muslim is NOT a race as you have French, Chinese, and other nationality Muslims. Islam is a religion, not a race.

The state is so bad, the police in Stockholm gives visitors, if they get any, a map of no-go areas, and the people who live there are under constant curfew to avoid being attacked. A common ploy is to set fire to a vehicle then bombard the firemen with stones; it is worse than living in Israel. Stockholm was a beautiful city. I know because I visited the town when I was in school, now it is known as the rape center of the world for the last decade. Yes, at the same time they let Muslims enter.

ISIL/ISIS has no respect for anything; three years ago, they went on a rampage through Iraq and Syria, destroying priceless museum artifacts.

Very sadly, the people in the Charlie Hebdo offices in Paris got slaughtered. The irony of the situation is that in killing those people, the Muslims put Paris in the spotlight. Instead of forcing the paper to close down, they made the opposite happen. A newspaper which people outside of Paris, and probably France, never knew about, got so many order requests they were selling out as soon as the papers hit the streets.

Pat Bertram Feb 28, 2022 2
Have You Always Wanted To Be a Writer? I always wanted to be a reader. That’s really all I ever wanted to do. I…
Publishing